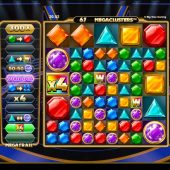 Millionaire Rush Megaclusters slot by Big Time Gaming is a feature-laden version of the clusters mechanic. It keeps the faith with similar symbols to the first one, Starclusters slot and subsequently seen again on the more volatile Cyberslot Megaclusters slot which began the trail modifier idea. We have the classic soft WWTBAM TV show music playing as we did with the original Who Wants to be a Millionaire Megaways slot and gentle sounds as the symbols cascade into view. So can we get to at least a small fraction of being millionaires here or will it be in a big rush to relieve us of our bankroll?

On the reels...
On Millionaire Rush Megaclusters we have the traditional format of requiring 5+ adjacent tiles for any wins which are replaced by new ones from above. Wilds can land anywhere and the top pays are for 25+ at 50x bet for 5 of the 7 Gem types and 30x for the lowest two, with the lowest 5-clusters at 0.5x for the Purple gem down to 0.1x for the lowest two Gems. You will notice on the left a Megatrail™ Ladder with 12 positions on which number 7 is always the free games trigger and the top one of 12 is a static jackpot of between 250 and 1000x which is double in the free games and paid on top of any other wins in the climb. There are numerous modifiers which randomly populate some or even all positions on the Ladder each spin. You are guaranteed the first modifier after 2 consecutive wins. Wilds will multiply each other if in the same cluster together and you've been awarded any multiplier on them.

Megatrail™ Ladder Modifiers
The positions other than 1, 7 and 12 will randomly be assigned any amount of these modifiers below each spin:
Wilds: up to 10 Wilds are added in random positions of the grid.
Multiplier Wilds: Wilds with 2, 3, 4 or 5x multiplier are added.
Symbol Explosions: each instance of the selected symbol clears all symbols in its row or column.
Symbol Subdivide: each large tile of the chosen symbol will subdivide to 4 smaller ones the same.
Symbol Upgrade: each instance of the chosen symbol upgrades to the higher one selected.
Symbol to Wild: each instance of the chosen symbol turns wild.
Mega Wild: a block of 4 wilds is added to the screen, two blocks if in the bonus which guarantees a win.
Win Multiplier: a multiplier up to 10x activated for the whole spin (except for the top-trail prize.)
Explosions: max 3 explosions, in the pattern indicated, removes and replaces those symbols.
Symbol Duplication: five large tiles of the chosen symbol are added to a row or column so a guaranteed win.
50:50: all symbols of either the top, bottom, left or right half of the grid are replaced.
Max Megaclusters: all large tiles are replaced by 4 small ones so max 10×10 grid.

Free Games
Get to position 7 on the MEGATRAIL™ during any base game spin, you will get 6 free spins on Millionaire Rush Megaclusters. Now there's an enhanced Megatrail™ which will be randomly populated just once for the whole bonus round on at least 6 positions. A retrigger of an extra 3 spins occurs if you reach rung 7 on any single free game with the maximum capped at 99. The bottom two positions will always contain a modifier. Some set-ups are far better than others, you want to see the Wild features clustered together lower down, preferably followed by a spin multiplier! The modifiers are enhanced in many cases from the base game for example the extra multiplying Wilds are 1-2 mostly in the base game, here you can get up to 4. We are told that 55,260x stake was the best pay in testing.

Our View...
Millionaire Rush Megaclusters slot is visually brilliant to play as it looks different for every spin and the random trail modifier arrangement really attracts your attention. The volatility is very high so be prepared for many dead spins here although occasionally some big wins appear if the modifiers are right. It's not as hard to win the static jackpot as you may imagine and I hit a 400x and 500x on my first two bonus triggers! The free games can be brilliant if you get a really good ladder on the lower positions which is why retriggers are limited to 99 spins. The bonus is very volatile and can often pay poorly and eventually you'll learn to spot the good set-ups that are likely to hit those massive wins. Overall this slot is one of best released by any developer for a while in my opinion. Whether you rush to return to it after the first visit is really down to sheer luck - on not...