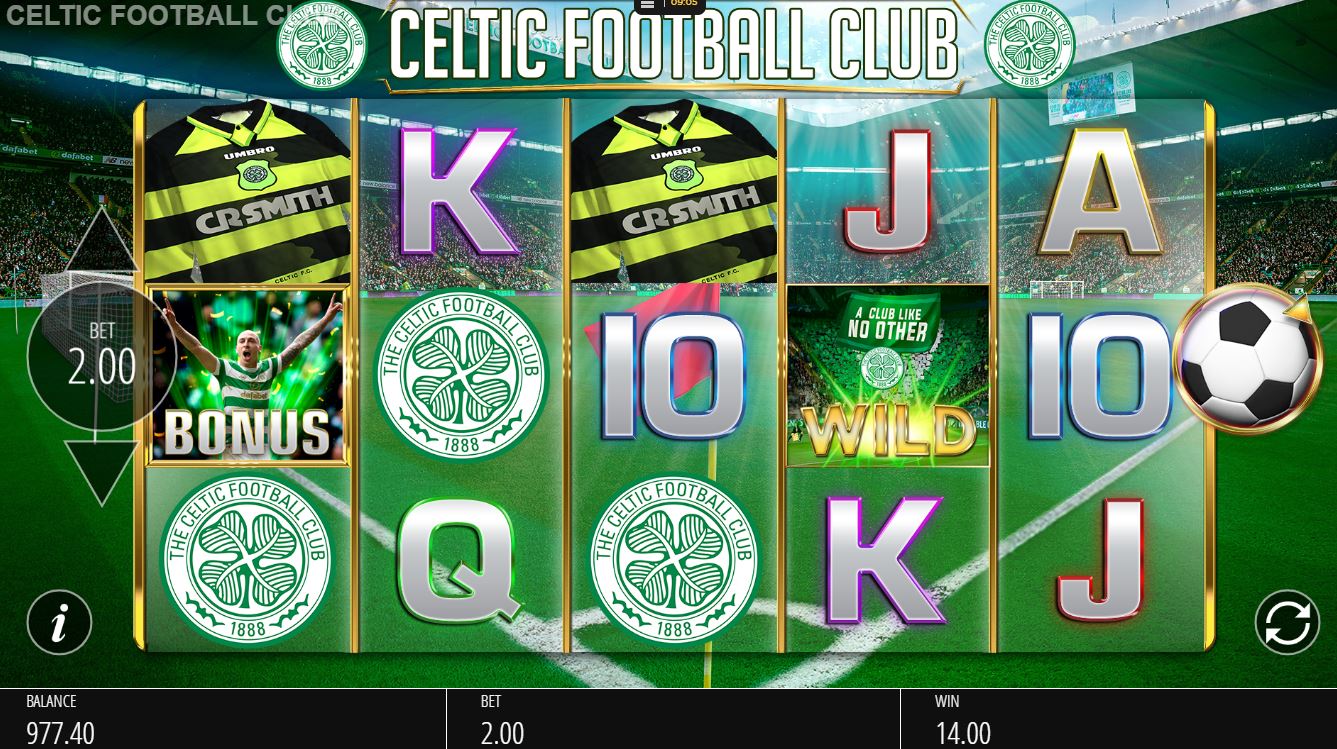 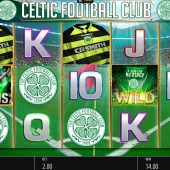 Celtic Football Club slot by Blueprint Gaming brings us a familiar theme based on the famous Scottish football team who were the first British club to lift the European Champions Cup back in 1967, a fact which is celebrated here. It's rare for slots to be centred around one team as football is tribal and it could limit the player base, so previous soccer themes tend to be more generic, like Football Fans, Football Carnival and Football Star. Naturally the background here is Celtic's Park Head stadium with fans cheering you along on every spin, but will it be win, lose or draw for our bankroll?

On The Reels...
There are 20 fixed paying lines over 5 reels of 3 rows each on Celtic Football Club slot with some symbols stacked. The pays for 5-of-a-kind can be substantial with 5 Wilds paying a staggering 1000x bet, 1967 Star 25x, Club Logo 15x, Home and Away Shirt 12.5x with 5 card values offering either 10 or 5x for a full line. Their famous old striker Henrik Larsson forms the scatter but as usual with Blueprint's 20-liners we have a couple of random modifiers.

Modifiers
Like Microgaming's Thunderstruck 2 we get random Wild reels but on up to 4 in this case, so you'll need a natural Wild on the 5th. reel to get that unlikely win of multiple 1000x bet winning lines! You may also see a randomly-triggered feature when the reels darken after a scatter appears on the first.

Changing Room Bonuses
When the Henrik Larsson scatters appear on reels 1,3 and 5 you will enter the changing room and see 4 shirts hanging up. Choose a shirt and you'll randomly select one of the four following bonus rounds...

Free Spins - 5 free games with stacked Coins which are mystery symbols and will all reveal the same icon. You can retrigger these 5 spins too.

Celtic Way Bonus - you progress round a board picking up cash multipliers and stars, but risking collecting two yellow cards and getting sent off with your prizes gathered.

Trophy Room Bonus - pick trophies for cash amounts and collect, or reject and pick again with a maximum of 3 rejections.

Our View...
Celtic Football Club slot is obviously going to appear to a certain kind of player, presumably not those whose allegiance lies with Glasgow Rangers! The RTP is pretty low at 91.86-95.25% which alas is a rather a good reason to avoid it, football loyalties aside. The graphics and animations aren't particularly advanced and the game was originally designed for Mr Green casino which may explain the colours here. There is however some potential here although none of the bonus rounds are particularly exciting. I won't become a season ticket holder at Park Head I'm afraid...