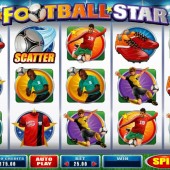 At the time of writing this, the 2014 World Cup in Brazil is just around the corner so it is a fantastic move from online slot developer Microgaming to choose this moment to release a football-themed slot game called Football Star.

The World Cup is Coming!

As fans around the world are waiting with eager anticipation ahead of the opening game of this year’s tournament, collecting their Panini stickers and playing an online Road to the World Cup on the new FIFA console game, Microgaming has added to the excitement with this slot title.

Football Star is a 5 reel, 243 ways to win slot that has everything a football fan slots player could possibly want. We’ve seen it before where Playtech released their Top Trumps Football Legends slot that football-based slots can really fall a bit flat with supporters across the globe. Luckily, I think Microgaming has gone a step in the right direction with this effort.

The symbols on the reels include a number of players that hold a slight resemblance to their real-life counter parts. There’s a Cristiano Ronaldo lookalike, Mario Balotelli lookalike, Manuel Neuer lookalike and a Keisuke Honda lookalike. Even the referee symbol looks like Mark Clattenburg! Mark Clattenburg? Really, Microgaming? You couldn’t gone for Howard Webb or kept it vintage with Pierluigi Collina? Anyway, other symbols on the reels include a stadium, football kit and football boots.

There is a free spins bonus round on this slot and that is triggered if you hit three or more of the football boots Scatters across the reels. If you’re like me in real life you will be searching for these football boots for days. Fortunately, you will be able to find them on the reels and not under all my wife’s clothing in our wardrobe. You will be immediately rewarded with 15 free spins. In addition to this, there is a Rolling Reels feature that comes into play with each free spins giving you the chance to hit more winning combinations and earn a multiplier value up to 5x. Every time you hit a winning combination, the symbols involved in that winning combination will explode, disappear and be replaced by new symbols giving you another chance to win.

There is also a Striking Wilds feature. The Wild is represented by the Football Star Logo symbol and the Striking Wilds feature can trigger randomly at any time. When it does trigger a player will pop up on the reels and shoot a ball at a random symbol on the reels. The symbol the player hits with the ball will turn Wild. It is possible to get Stacked Wilds on this slot so look out for those because they will bring in some big wins.

Football Star might not be packed with interactive bonus features or allow players to become more involved in the football side of things but it is an enjoyable slot. The combination of the free spins, Rolling Reels and Striking Wilds makes it a bit different from other slots with their traditional free spins bonus round and Pick ‘em Bonus. This is a much more thrilling slot than Playtech’s football releases including the above mentioned Top Trumps Football Legends slot and the even more anti-climactic Football Rules slot. 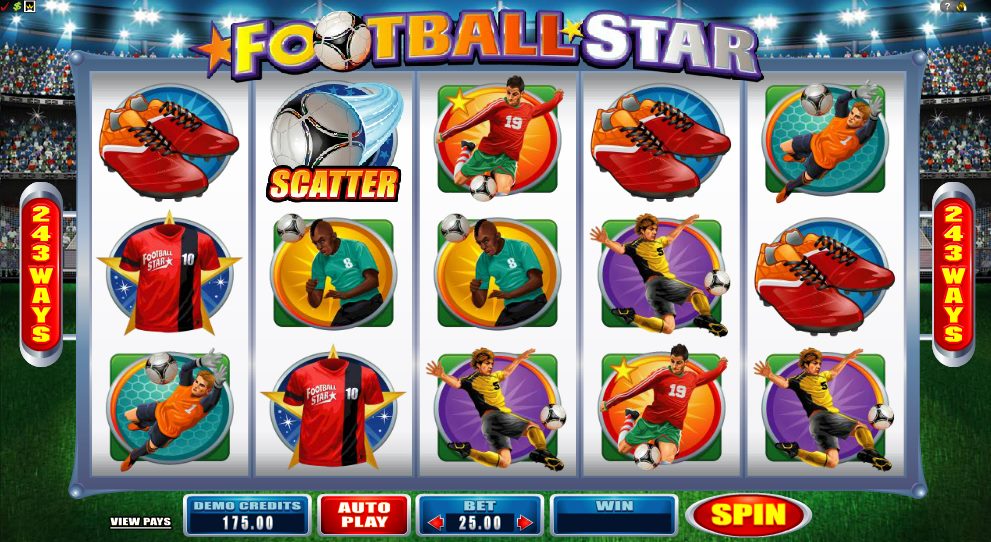