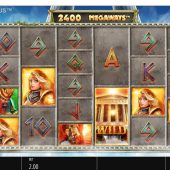 Gods of Olympus Megaways slot by Blueprint Gaming is to be fair slightly different to the game you may think it's similar to when first opening, Genie Jackpots Megaways. The grid is brightly coloured and the artwork pertaining to this Greek God quite spectacular with flaming torches to the sides, a background of the Parthenon and of course suitably dramatic musical scores as we spin. The classics make great themes for the Megaways formula as we saw with Nextgen's Medusa Megaways and indeed Blueprint's very own Thunder Strike Megaways, so can Olympus give us some mega pays as well as his Megaways?

We have 6 reels as with most games using this mechanic but here there's a limit of 5 rows each meaning a ways range of 64 to 15625 on Gods of Olympus Megaways slot. The pays for 6-of-a-kind are lower as a result and you get 25x for Zeus, 5x Athena, 2.5x Warrior or Masked Figure with six card values paying either 1 or 0.5x. Symbols appear stacked and singly with Parthenon Wilds single too on all reels bar the first. Your scatter is in the form of a Lightning Bolt appearing on all six reels. Now if you recall I mentioned Genie Jackpots above which has the same amount of ways as we get here, which has many random modifiers and I can assure you you won't be disappointed in that respect on this slot either.

Randomly Zeus may appear in a stunning display of noise and fire to grant you one of 5 modifiers. It is also worth pointing out you can use the Feature Purchase and pay 50x bet to get a Power Spin too but I really wouldn't recommend it as these are very hot and cold and you can't choose!

You need 3 or more Lightning Bolt scatters to get 10 of them. You then pick from crystals to get one of 4 types allocated to you and you can buy a trigger for 100x bet if unwise or rich.

Colossus Free Spins - a single 2x Wild roams the grid on reels 2 to 5. You collect scatters to upgrade this to a 9x Wild block right up to a 4x5 Wild which would be a massive 625x Wild Multiplier, like the top award on BTG's Final Countdown. These upgrades add 2 extra spins each time.

Wild Storm Spins - highlit tiles on reels 1 and 6 will turn their corresponding symbols Wild in the middle 4 reels each spin. Scatters upgrade minimum reels rows and add 2 spins each time they do that.

Rise of Olympus Spins - each Wild landing in the centre 4 reels adds a 1x multiplier to the Wilds, unlimited. Every 5 Wilds appearing add 2 extra spins.

Almighty Wild spins - like Raging Rhino, the centre 4 reels will have either 2x or 3x displayed on any Wilds landing. Collect scatters to upgrade these multipliers to 4x and 5x as well, thus a possible 625x multiplier for all 4 Wilds in one spin.

Gods of Olympus Megaways slot packs a lot in and looks, sounds and animates very well. You get a good 96.03% RTP but beware the slot is quite volatile too. You can wait a lot of spins for any random modifier and when buying anything here you do not get to choose the bonus. All variants of the triggered free games are absorbing, entertaining and have huge potential so in order to see the benefits of them you need a reasonable base game performance, which you do seem to get. I did notice though that the free games choice heavily favoured the Rise of Olympus type of spins, which I felt were the worst and actually got fed up with seeing. That's the only things that would make me think twice about going to visit old Zeus again...