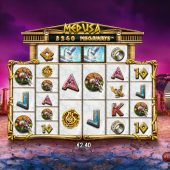 Medusa Megaways slot is Nextgen Gaming's first foray into the Megaways mechanic they have licensed from Big Time Gaming, following hot on the heels of Red Tiger's first version, Mystery Reels Megaways. The slot is based on the the legend of Medusa and firstly I am pleased to say the game retains all the ghostly choruses, singing and brilliant sound effects of the classic Medusa 2, itself a sequel to the original Medusa. Nextgen haven't tried to be too flashy here, but have used the simplest format the same as Bonanza has. Medusa's dangerous and volatile charms have led many a bankroll to oblivion in the past, so how will ours fare here?

Medusa Megaways uses the 324 to 117,649 ways format which means reel rows are dynamic on each spins and vary from 2 to 7 and you get an extra scrolling reel of 4 single symbols above the centre four of the six reels. The reels lie over a ruined temple under a threatening dark sky with equally portentous music, and contain symbols both stacked and single. Winning combinations are removed and tiles replaced from above. The 6-of-a-kind pays are best for the Horse at 30x our 25-coin stake, then Warriors for 6x, Jewel 2x, Ring 1.2x, Winged Shoes 0.8x with 5 card values all at 0.4x for the full way of 6.

Wilds can only appear on the scrolling reel but when they do Medusa may appear from them in full length and turn any amount of the tiles below Wild. If she doesn't form any wins but a win removes a tile from the scrolling reel, the Wild will move left on it leaving the unused Wild reel in place, and then a fresh expansion will occur on the reel the Wild moved over to.

If you land 3 or more Medusa Logo scatters on the grid, whether in one spin or via cascades, you get 10 free games. Each scatter over the 3 will add 5 more games as on Bonanza. You begin the spins on Medusa Megaways with a 2x multiplier and it increases for each winning action, unlimited. You now see the Snake Strike feature activated too. If a Warrior appears on the scrolling reel a Snake will strike him. If it strikes from the left of the scrolling reel then the Warrior turns into a Medusa's Gaze expanding Wild. If the Snake from the right attacks, then the Warrior turns into a scatter. The scatters still appear on the main reels so if you've two in view and the Snake Strike creates a third, 5 extra free spins are granted.

You can buy the bonus for 100x stake but Medusa Megaways is reasonably generous with natural bonus triggers. Either way, if you're not happy with the win from your free spins round, you can take one chance to replay it. You may end up with more, or less.

Medusa Megaways is a fantastic-looking Megaways game, possibly the best one yet. I personally think Medusa 2 has some of the most eerie and haunting sounds I've ever heard on a slot, with great animations and therefore I'm really pleased Nextgen replicated them here. The second chance feature is a super idea and even if you forfeit a poor bonus and the second chance is as bad, you've had double the entertainment. You have great potential too for huge win totals although the the 2x start means only 10 spins to begin with and retriggers are hard to get. Those Medusa's Gaze Wilds can really kick in some big hits in the free games too, as well as looking spectacular. I know the Gorgons are dangerous, but this one has enchanted me...