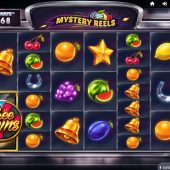 Mystery Reels Megaways slot is the first edition by Red Tiger since acquiring the Megaways license from Big Time Gaming. A few other developers have already made Megaways slots including Kalamba Games' Machina, Blueprint Gaming's Diamond Mine and Relax Gaming's Temple Tumble and more are due to do so. Here the theme is a fusion of retro symbols and modernistic sounds and music with the reels set as if they were in a chrome-trimmed cabinet as a land-based slot might be. Initially I do like the look of this game and I hope that the mystery I encounter here is not about where my bankroll went so quickly!

As I said Mystery Reels slot is filled with traditional symbols both stacked and single and the Megaways can be from 64 to 117,649 as you randomly see two to seven rows displayed on each of the six reels per spin. Unlike Bonanza you don't see a scroll of four symbols over the centre 4 reels which is why the minimum amount of ways here is not 324 as it is with that version. There are also no Wilds here which might normally be a concern but I can assure you it's not. The 6-of-a-kind pays are 50x bet for the 7's, 7.5x Star, 2x Bell or Horseshoe, 1.8x Melon or Grapes, 1x Plum or Orange and finally 0.9x for the Lemon and 0.8x for the Cherries. You can get free spins scatters on all reels and all winning symbols are replaced by more cascading from above until no more wins are formed. So this all pretty typical so far.

Any symbol on the grid after a spin may turn into a Golden Apple. This will then make a trail around any amount of symbols and reels and when it disappears, those positions all reveal the same icon. This is far better to watch than mystery stacks as you see on some games and usually produces a win.

Land 3 or more scatters and you get 8 free games. You cannot buy the feature here which I think is a positive move by Red Tiger, but you can gamble on a segmented wheel as with BTG's Extra Chilli. There are 10 segments of which 6 are 4 spins, so if you lose you still get some free games unlike Extra Chilli. 3 segments are for 12 spins and one is for 20. Should you win and get 12, another wheel is presented and you get 6 positions of 6 spins, 3 of 18 and 1 of 30. Win 18 on this and a final wheel is offered with 9 spins on 6 segments, 24 on 3 and 40 on 1. You can of course collect at any time.

When you do commence the spins, there is an increasing multiplier in play for any winning actions during them. You can get a 3-scatter retrigger for 5 extra spins too. If you trigger the feature initially with more than 3 scatters, the gamble wheel amounts simply begin up a level for each extra scatter. You should always collect the spins if you ever land on the single segment that offers 20, 30 or 40 depending on what wheel you've reached!

Mystery Reels Megaways slot is a very good first Megaways slot by Red Tiger. The RTP is 96.08% and despite the stripped-down raw nature of the game it's colourful, entertaining and has considerable potential. I like the retro symbols and the mystery Apples seem to always produce a win instead of the pointless mystery stacks you often find on other slots. The best win is capped at 10,000x bet and the bonus is more frequent than you may have experienced on other Megaways games. No mystery about this at all - I will be coming back...