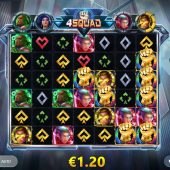 4Squad slot by Red Tiger is another grid-based game of which they have made many, some good and some not. Here we get a cartoon sci-fi future world theme with some good music and sounds with our grid over a deserted city boulevard and 4 special characters forming our squad. The game mechanic here seems to be based on those Play'n Go grid slots Like Moon Princess whereby you get single features and a special bonus where all 4 are activated, again seen on Viking Runecraft slot. Judging by the 4 meters appearing over the grid, we could also add Yggdrasil's Vikings Go Berzerk into the list of slots which use a similar structure. Anyway, how will taking on this motley squad turn out 4 our bankroll?

We have 7 columns here on 4Squad slot of 6 individual tiles which cascade down to hopefully form clusters of 5 or more. The pays for the best wins of 20+ in a cluster and the lowest of 5 are: Fist 50/1x, Yellow Character 9/0.6x, Red 8.1/0.5x, Blue 6/0.4x. Each character has a matching card suit of the same colour with Yellow Spades at 4.5/0.3x, Red Hearts 4/02x, Blue Diamond 3.5/0.2x and finally Green Club 3/0.1x. There are no Wilds in the base game and no scatters either, although we can see Wilds specially created as we'll now discover.

This is where the low-pay card suits come into reckoning. Each character above the reels has a meter of 8 segments which is filled by their respective card suit colour symbol as well as their character colour. Should wins of that symbol fill any meter in the same play, the modifier is awarded.
Gold Beam - this is activated by Yellow symbols and will apply a multiplier of 2 to 10x to the current win.
Red Burst - activated by Red symbols, random symbols clone to form blocks.
Blue Strike - activated by Blue symbols, swaps random symbols into Orb Wilds.
Green Quake - activated by Green symbols, removes all the suit symbols and replaces them with character ones.

This is the one you want and it's achieved by filling all 4 meters int he same play. You then have all 4 Superhero features triggered in one free spin and to make it even more exciting, you don't see any card suits for the duration. Some big wins possible here but you can't fill any more meters in the mode.

4Squad slot is not as volatile as its similarly-modelled games mentioned above which makes it more playable in my opinion with some good base game hits possible. The RTP isn't great at 95.71% but the sounds and graphics are quite good and it doesn't become tiresome to play like some slots can. The main Superhero mode also doesn't seem too hard to trigger and you'll be unlucky to get less than 40x bet in it, although it is volatile and where you're most likely to see those huge wins of over 500x. You may surprised and find that this squad is one you'll want to join...