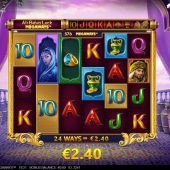 Ali Baba's Luck Megaways slot by Red Tiger is straightforward yet potentially profitable as it uses the rare expanding symbols mechanic where Megaways is concerned. We have the Arabian music, palace veranda background and symbols you would expect from the theme, quite nicely done. Slots like Legacy of Ra Megaways from Blueprint, Book of Gods slot from BTG have used expanding scatters but the best comparison would be Leprechaun's Magic Megaways as yes, it's a clone of this one. So how much luck will old Ali bestow upon our bankroll?

On the reels...
There are six reels of 2 to 5 rows on Ali Baba's Luck Megaways slot with symbols single, no Wilds and 64 to 15625-ways to win. The pays for 6-of-a-kinds are 25x Ali Baba, 8x Princess, 3x Urn or Ring with five card values of either 1.2 or 1x bet for a full way. Above the reels lies a gold chart of the various symbols and each win you get on the reels will make that symbol gold so on the next spin that symbol will pay as an expanding scatter. Win with it or not, the next spin it goes back to normal.

Free Games
The remaining symbol is the Treasure Chest of and 3 will award free spins decided by a Wheel which awards 6 to 12 with +4 for any scatter over the 3. Now all the winning symbols will remain gold for the duration of the bonus so a few early wins and you could collect a good amount, but probably not near the 20,000x bet Red Tiger boast is possible on the game's splash screen. Three more scatters award another spin of the wheel.

Our View...
Ali Baba's Luck Megaways slot has a RTP of 96.09% and average graphics, sounds and animations. Theoretically you can hit some very large wins in the base game as well as the free games but these will often disappoint when seeing your spins run out with just one or two rubbish symbols illuminated as scatters. Get lucky though and thousands times bet can be won, but don't hold your breath. I'm not sure I would land my magic carpet too near this slot again...