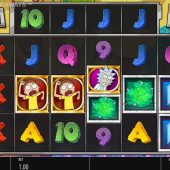 Rick and Morty Megaways slot by Blueprint Gaming is based on the TV Comedy cartoon from the US first screened in 2013 and still running. You have the crazy looking cartoon city background where nutty inventor Rick resides and of course music from the show's scenes along with character soundbites. Blueprint have already released one trademark Megaways with Deal or no Deal, Big Time Gaming weighed in with WWTBAM Megaways and possibly the best one is StakeLogic's recent The Expendables Megaways. So will our bankroll survive Rick's mad science here?

There is a scrolling reel of 4 symbols above the centre 4 reels and that tells us we have 324 to 117,649 ways on the game with the variable reels rows. The same as usual here on Rick and Morty Megaways slot with winning symbols replaced by cascades from above the columns and symbols can be stacked, with Wilds appearing only on the scrolling reel. The best pay is Rick at 50x bet for a 6-of-a-kind, Morty 5x, Icicle or Cabbage 2x with six card values paying 1.5 or 1x for a full way of 6. Mystery symbols are present which always make a win in the form of the Laboratory Doors and Bonus scatters appear singly on all reels.

You get 12 free games for 4 scatters with 5 extra for each one over four. There is choice of 3 types of bonus, or you can spin a wheel to randomly select a bonus with the chance of either getting more or less spins than the 12.
Pickle Rick Spins - standard increasing multiplier for all winning actions and the mystery symbols are Gherkins, added to the reels here and tending to be more frequent than in the base game.
Federation Wild Spins - on the middle 4 reels, if the any symbol matches the one immediately above on the scrolling reel, it turns Wild. A Wild on the scrolling reel will turn all symbols on it Wild and there in no multiplier here but you could theoretically get 7x7x7x7 Wilds for a spin!
Vindicators Spins - cash values can land on the reels, including 4 bigger ones represented by characters on the left of the grid, paying up to 100x. You will need a Vindicator symbol on the scrolling reel to collect them and you get them repeated up to 4 times if all 4 scrolling symbols are Vindicators. You get standard wins too during the bonus. When the Vindicator does appear on the top reel, the reels respin until no more cash values are added on any spin at which point you get paid the values' total.
All the free spin types can be retriggered with 3 scatters on the scrolling reel earning you 5 extra, all 4 gets you 10 extra.

Rick and Morty Megaways slot is fun to play and it's done really very well if you like the TV show, with good animations, sound effects and graphics. You get a rather good 96.55% RTP and the features on average pay quite well, although they are as infrequent as they are on Bonanza for example. If you're just going to pick the Pickle Rick spins with increasing multiplier, you may as well play Diamond Mine so let me tell you that the other two options are just as good with big potential! The scientist Rick may be a bit mad, but you wouldn't be if you gave this a try...