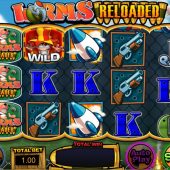 Blueprint Gaming have followed up their original Worms slot with an upgraded version - Worms Reloaded. Based on the old Playstation game, our military earthworms have more adventures for the player in this edition. If you missed the whole 'worms' series of games back in the late 90's then it is probably best described as a bunch of worms trying to take each other out with a wide variety of weapons that include machine guns, bazookas and exploding sheep!

What's included in the reloaded version?

Worms Reloaded slot is a usual 5-reel 3-row slot with 20 lines. The worms reloaded appears stacked and pays 25x stake for 5-of-a-kind (5OAK) and there are non-multiplying Wilds singly on each reel which also pay 25 x stake for 5OAK.  Now this brings us to the first of many random in-play features involving Wilds. If the Worms Grenade in the logo explodes one of these will be triggered:

Banana Bomb Wilds - As the reels are spinning a banana bomb will land on the screen, explode and populate the reels with banana bomb wild symbols. The reels can be respun with the Wilds sticky if a worm appears and fires a bazooka.

Holy Hand Grenade - During a spin a Holy Grenade will appear and explode causing more bonus symbols to get added to the reels. This will give the player a higher chance of triggering one of the bonus rounds.

Teleport Mayhem - Teleport Mayhem stops the reels. A worm will then appear and press a teleporter causing the symbols to disappear and reappear to form win(s). This can keep appearing as a new win until the Worm self-detonates.

Concrete Donkey - As the reels are spinning a Worm will appear and press a button causing Concrete Donkeys to fall creating Wild reels.

Wriggling into the bonuses features

Worms Reloaded has 4 different bonus rounds, no picking necessary as the scatters appear on 1,3 and 5. In common with many Bluprint games the last reel has different scatters and there are 4 there to go with the ones on reels 1 and 3.

Jetpack Bonus - You will get a space-themed pick-me and the UFO's will reveal stake multipliers but beware some may kill your worm and end the round! Should you get to the end of the UFOs you will be presented with some planets to pick from. This will add a large win to whatever you already collected.

Blitz Blast Free Games - You get to see the streets of London here as you start your unlimited free games strapped to a rocket and any worm appearing on reel 5 burns your fuse but at the same time increases your win multiplier. Unfortunately the fuse will end and you'll be blasted from London into orbit with your rocket and the free games end.

Super Sheep Free Spins - These 6 free games start you off in a castle. Similar to the bonus round in Microgaming's Terminator 2, the screen adds a fourth row but you still have 20 lines. In any spin up to 3 super sheep may appear and super sheep wilds are added to the reels in a stacked form - but the worm is a bit trigger-happy and may shoot them off as you go. There is a twist at the end involving yet more ordnance - you get 3 grenades to choose from, and revealing a Super Sheep retriggers the 6 spins.

Battleground Bonus - You select from landmines which can award either one of the 3 bonuses above, a multiplier or collect. Rather a pointless bonus unless you are lucky enough to get a decent cash award plus a bonus round.

Worms Reloaded also has the jackpot King feature whereby 5 overlaid symbols trigger a reel game with a cash-climber, and should you get 15 crowns to reach the top of the climber you will find a wheel, where there is a chance of the progressive.

The game suffers from a paltry 92.63% RTP due the contributions to the jackpot feature. Aside from this, the game awards frequent wins but the bonus rounds are less than inspiring usually and quite hard to get. The random in-play features though offer some decent returns and the sound effects are quite tolerable, especially if you enjoyed the Video Game! I'd say get the soapy water on the lawn, and do some worm charming.....