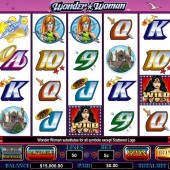 For men of a certain age, Saturday afternoons were spent in front of the TV getting funny feeling in the trouser area watching Lynda Carter strutting her stuff on-screen in Wonder Woman, dishing out justice to all manner of bad guys and dispensing a swift whip of the Lasso of Truth (no, really).

Background of a Heroine

For the uninitiated, Wonder Woman began as a comic book heroine in the 1940s, mainly as a figure of anti-Japanese propaganda. Mostly, though, she was an excuse to show off a set of wicked curves and a massive array of weapons, including the lasso, a pair of indestructible bracelets, and a tiara which could be used as a throwing weapon.

It's a shame, then, that online casino slot developer Cryptologic rely so heavily on the regular 10-through-Ace symbols on the reels, with only a couple of Gods, Wonder Woman's invisible jet and spiritual Greek temple home for company. The poker symbols do contain a few of our heroine's weapons, however, and the background is adorned with stars n' stripes and an atmospheric city landscape.

It's All About the Wonder Wilds

Wonder Woman is the Wild in this 5-reel, 50-payline online slot, appearing on Reels 2-5 only, and she substitutes for all symbols other than the logo'd up Scatter and Bonus icons.

Win 100x Your Line Bet in the Ares Bonus

The Scatters play their part, too. Two or more Wonder Woman Scatters awards an instant payout whilst three or more triggers the Ares Bonus Round.

Wonder Woman's arch-nemesis, the god of War, will attack the buxom bad ass, and if Wonder Woman defeats him and his army of crazed zombies she'll award you a top prize of 100x the line bet.

When it comes to high-end comic book adaptations, they don't come much better than Cryptologic's DC tie-in slots such as the superb Superman and the iconic Batman slot. While they differ in many ways to Playtech's rival Marvel superheroes range of games such as the frantic Fantastic Four and the thrilling Iron Man 2 slot, they offer plenty for the action fanatic to enjoy. 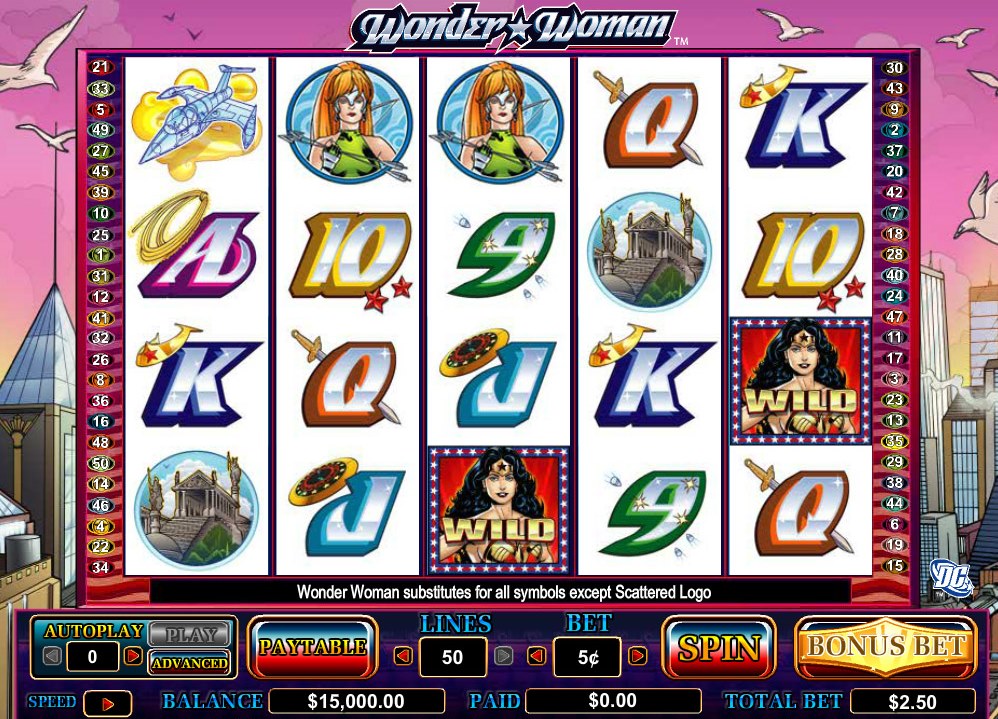