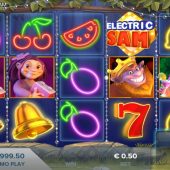 Electric Sam slot has a zany theme which appears to be a very hairy man wearing a crown with a fascination for string lights such as those LED ones you may adorn the Christmas Tree or an out-house with. Don't ask me! Anyway, a jungle background sits behind the reels, and we have the background noises of birds and insects and jungle drums when the reels spin. So will this game get your juices going?

There are 243 ways to win over 5 reels of 3 rows, and instead of card values, we begin with neon stacked sevens, cherries, lemons, plums and melons paying 1.6x bet down to 0.5x bet for a 5-of-a-kind. To keep Sam company, he has 2 companions called Sandra and Maggie paying 4 and 2x respectively while he is top of the bunch at 6x bet for the 5 and can also appear stacked, unlike the pals! You get the game's logo as a Wild on reels 2 and 4, and the Bell is the game's scatter, so 'ding-ding-ding' gets you the free games bonus.

You begin with 5 free games if triggered with 3 Bells or 10 and 15 if by 4 or 5 of them. You have a few enhancements to note, the first being Sam himself if he appears in 3 or more positions anywhere on the grid as he will then randomly select a position to become a Sticky Wild for the remainder of the games. Should Sandra appear in 3 places, you will be awarded an extra 1x multiplier up to a maximum of 10x for the bonus total, and Maggie will implode herself and the fruit symbols hopefully changing things for a decent win as new symbols drop down to replace them all. There is no retrigger, but any single Bell appearing will add more games to the round.

Electric Sam is a fun slot with decent graphics and animations and is not too annoying to listen to. It definitely has a following, as developer Elk Studios has followed it up with Sam on The Beach. The main drawback with Electric Sam is the continuous slow 'heartstopper' spins when 2 Bells land and the reels then slow as you see if the third one drops in for the bonus trigger - it happens far too much! The RTP is 96.00%, and base game wins occur very frequently although due to the 243 ways they are seldom very high. So, I would go to say that Electric Sam is a fun game, but lacks the 'spark' of other Elk games such as Wild Toro or Poltava Flames of War.