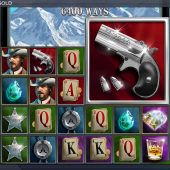 Black River Gold slot by Elk Studios takes us prospecting in the mountains of the American West which make our backdrop here with gentle themed music and all the sound effects you'd expect. If you've played Netent's Wild Wild West slot you'll get the idea, or more recently the volatile Dead or Alive 2. I'd say the nearest match to this game though is Relax Gaming's Money Train slot due to the grid size which we'll come to shortly. So will we strike it rich for our bankroll here or drill away for nothing?

There are 4096-ways on Black River Gold slot which means we start off with 6 reels of 4 rows each and no fixed pay lines. Symbols tumble in as individual tiles which means they can appear stacked too and each winning one is removed for replacements to cascade in from above. Each win also expands the grid by 1 row up to a maximum of 8 rows therefore 4 or more wins on the same play can expand the grid to a maximum of 262,144 ways. You can also get colossal 2x2, 3x3 or even 4x4 symbols drop in randomly on any play.

The symbol pays are not huge as you'd expect with all these ways in play and the Oil Baron pays 3x bet for 6-of-a-kind, Diamond or Gold Nugget or Sapphire 2x, Revolver, Whiskey, Star or Medallion 0.8x with four card values all paying 0.3x our 100-coin bet for a full way of 6. You can also get red Rose Wild tiles land anywhere except column 1. There are also a couple of other modifiers aside from the colossal symbols though.

Compass - If you see a Compass land and 2 identical symbols are either end of the needle they will also become Wilds. It's sticky so will remain on the grid until the end of the play and can work more than once.
Revolver - This is a big symbol of 2x2 or more and randomly it may start absorbing the symbols below in the columns it lands in. If it can absorb 6 different symbols before it reaches the bottom it's full and will turn into a block Wild. It disappears once it has been part of a win of all symbols it represents and if turned into a Wild, once it's been used.

You need to collect 3 to 6 Gold Bonus scatters to trigger these at 10, 15, 20 or even 25. Any increase in reel rows and thus ways will not reset between spins during the bonus and it can retrigger. Wild Compasses collected will become sticky and turn Wild when reaching the bottom. All unused Wilds will also become sticky until they are used up. There is a pay limit of 500,000 coins or in other words 5,000x bet during the bonus and it is volatile with large potential too.

Black River Gold slot is pretty much modelled on their Ecuador Gold slot game which isn't a bad thing. The RTP is 96.01% and the slot looks very good with great animations and sound effects so you shouldn't get weary while waiting for the free games which can take a while to arrive! The base game can pay well when the reels fully expand and the Revolver or colossal symbols appear at the same time, but you will see lots of dead spins with this maths model too. Your bonus is quite exciting to watch as the grid expands and the Wilds and Compasses are collected which means those low 6OAK symbol pays don't seem too bad after all. I shall certainly go prospecting again at Black River...