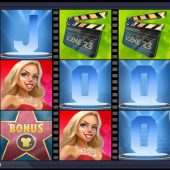 Bloopers slot is centred around the out-takes when filming in studios or making movies, which result in the clap boards being produced over and over until the actors or presenters get the lines right or stop laughing at how bad their script is, or both. Quite often these mistakes from dreadful soaps and dramas are collated and amalgamated into those pointless half-hour TV shows with their canned laughter, but will it be a mistake to play this game?

You have 243 ways to win over 5 reels of 3 rows so no pay lines needed and you pay 100 coins to spin. There are card values stacked which pay the low wins at 0.6 tp 1.2 x bet for a 5-of-a-kind and the male and female movie stars are the top symbols 6 and 4x bet respectively for the 5. You have the clap boards and movie reels in between and single Wilds on all reels. There are also random in-play features from any one of the five Blooper workers and these are described in the Bonus section below. Landing 3 or more Hollywood Star Bonus symbols on consecutive reels from the left one will trigger the game's bonus spins for you.

You get unlimited free spins until one of the 3 middle reels completely fills with sticky Wilds which are created when the game selects either male or female movie stars and they fall on those reels. On reels 3, 4 and 5 the star scatters are overlaid with a cartoon studio worker and so at least the one landing on reel 3 when you trigger the spins will be in play for the duration. These give you enhancements each spin as follows:

Sound Tech - hands out some sticky Wilds and awards a respin.

Make-up - she will remove a sticky Wild and thus increase the length of your free games.

Cutter - he snips the reels and lets new symbols drop down to hopefully improve things for you.

Stunt Man - he may turn any reel Wild for you.

You can't retrigger but 3 connected stars will enact another Blooper so you get an extra enhancement on the spins. You can have multiple Bloopers active simultaneously.

Bloopers slot is well designed and fun but like with their Electric Sam game there are far too many 'heartstopper' base game spins where two scatters land on reels 1 and 2. The cynical side of me can't help noticing that the colourful charaters in this slot look a little like the Minions in the 'Despicable Me' franchise, but I will let you reserve judgement on whether this is a blatant rip-off or not. The pays are low due to the 243 way set up and although the animations are good in the bonus the pays are dreadful in the main unless you get 3 or more Bloopers working together. The chirpy classical music is irritating too despite the good 96.10% RTP. I really wish this had been left on the cutting room floor...