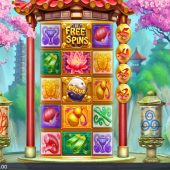 Chi slot by Elk Studios has turned the slotting world upside down - literally! This Chinese theme has a stunning background of cherry blossom and a picturesque valley with the reels set in a colourful pagoda and of course you spin to traditional cymbal based music. This is Elk's fourth Oriental game after Ho Ho Tower, Hong Kong Tower and Kaiju and possibly will be considered the best in future when we see the potential available here. Chi means energy or life force in Chinese, so either of those affecting our bankroll here will be very desirable all round.

The first thing you will notice here on Chi slot is the fact that a normal grid of 5 reels of 3 rows has been turned on it's head! Yes, there game seems to have been turned 90 degrees so the 5 reels spin horizontally and so have the 27 pay lines, which pay both ways too which means from the top and bottom. The symbols appear stacked except for the Wild or Scatters and the 5-of-a-kind pays are 10x Lotus Flower, 6x Lantern, 5x Gold Pear, Jade 3x, 2.5x Fish or Urn and 2x Turtle or Pipe. Before we get to the two excting bonuses here, we have two modifier characters.

There are two little cartoon cat characters called Chi and Mow which appear on the left and right of the grid respectively, alone or together.Chi will add Wilds, up to six, to the grid and Mow will activate the Golden Multipliers of 2 to 5x on the right of the grid. Neither are guaranteed to make a win, but Chi's Wilds usually will and if Mow's multiplier is activated as well then some good wins may appear.

If you see 3 bonus scatters on reels 2,3 and 4 then you will see a trail appear of win multipliers to 200x bet. On top of those sits the grid but with only cash multipliers on the reels in yellow and the biggest in red. Land on red and you will progress up to the next reel, yellow you get the value added to your total and collect. On the top 5th. reel is a red upwards arrow and this would take you to the top of the trail and award you a total prize of an incredible 10,000x bet! To move along the trail until the top 200x value below the reels, Chi spins a reel with 1-6 or collect on it, like the Leprechaun's trail on the original Rainbow Riches.

Three or more scatters triggers 10 free games, up to 20 for all 5. Your can retrigger them and Chi and Mow will do their modifier stuff here but with a difference. Chi's Wilds will become sticky for the duration, and each Mow multiplier will be sticky too and rise by 1x each time he appears, to a maximum of 5x. Great round with early Chi Wilds, not so great if the modifiers don't occur early.

Chi slot is colourful, inventive and very entertaining and I liked it from the start although it may take some players a while to get used to the reels being on end! The RTP is 96.0% and win frequency is OK although you won't win much usually in the base game unless the Chi and Mow appear simultaneously. The Stairway trail rarely returns less than 30x bet and neither do the free games but naturally that 10,000x bet chance in the latter feature will surely tempt many players. I must say playing this slot has definitely raised my Chi for a while...