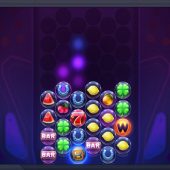 Bompers slot by Elk Studios (yes, I never heard of such a daft name either!) is an ultra modernistic game with plenty of neon and a banging techno music soundtrack. It's clearly based on the mechanic of their own Cygnus slot as I will show later, and tips its hat also to their Ecuador Gold slot and/or Tahiti Gold slot. The difference here is we have retro symbols to go with that modern soundtrack and appearance mentioned at the start and a kind of pinball-based background. Can our bankroll get some bumper benefits here or will we leave thinking 'bonkers' instead?

You have 6 columns starting with 4 rows each and 4096-ways to win. Winning tiles are removed and you get a 'gravity effect' on these round tiles! Instead of the 6 columns restricting replacement tiles to their own column, they will roll to the left and reach the lowest point leftwards vacated by any winning ones. The symbols are individual so can appear on their own or effectively stacked. The 6-of-a-kind pays are 10x 7's, 3x Bar, 2x Horseshoe, 1x Shamrock, 0.6x Melon or Orange and finally 0.3x Cherry or Lemon.
You get a Wild tile too and bonus symbols but as you may have expected, there are some modifiers in play here. Successive wins also increase the rows when new symbols are added, so the game can grow up to 8-rows high and 262,144-ways!

Mystery Bomb - one or more of these can land. When it happens, the Bomb plus the other touching 6 tiles all transform to the same symbol. When these patterns of 7 symbols overlap, all the overlapping symbols turn Wild.

Shooting Star - when this appears, it travels upwards to create a mixed collection of up to 7 symbols, of which 1 to 3 will be Wilds.

Bompers - randomly, up to 5 of the 48 tiles holes on the grid can glow blue and become Bompers, which will then turn into Wild positions. These may or may not be in within the 4096-ways you are playing at the time, but will fall down. Each symbol winning with one of them fills its meter turning it into a Sticky Wild if you're lucky (so it won't roll away left) and you get free drops until no further wins occur.

You need 3 bonus scatters for 7 free drops, which can be retriggered. You will start with guaranteed Bompers, up to five. When any fill their meter and turn sticky Wild, they will remain in place for the duration of the bonus. Your win is capped at 5,000x bet here.

Despite the silly name, Bompers slot is quite fun to play although it has for the first time seen Elk offer a RTP of less than 96%, in this case 95.80%. The music is okay if you like that sort of thing, which I don't, but nevertheless it was tolerable mainly due to the other sounds and animations being of a good standard. It's hard getting the bonus so it's a good job you get the occasional bigger wins in the base game. The bonus is a bit hit-and-miss; you'll either get something in the 10-40x range or land a good 3-figures or better times bet as your final outcome. The name here is lame, but it's all about the game...