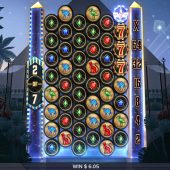 Cygnus slot by Elk Studios is a spectacular looking game with an evening Egyptian theme featuring the star constellation Cygnus in the sky behind a pyramid. A pair of Cleopatra's Needles stand either side of the grid and we get mysterious Egyptian music as we play. This Pharonic subject is perhaps the most oft-used in slots so has some serious competition from the likes of IGT's superb Cleopatra Plus, Novomatic's Book of Ra Deluxe series and more recently Blueprint's Megaways version of Merkur's Eye of Horus. It's clear from those tall needles that these reels can grow in height, but will they help our bankroll go stellar too?

Cygnus slot is different from many tile cascade games and I'll explain why. Instead of the 6 columns restricting replacement tiles to their own column, we have a 'gravity effect' here. This means the tiles are round and if say there is a gradient left over the first 5 reels from right-to-left and a tile drops into column 6, it will roll to the left and reach the lowest point.

As stated above, the tiles roll until they reach their lowest point. When no further wins are created in that initial action on the starting 6x4 grid, the game fills up the columns again, but this time so they are 5-high and you have 15,625 ways in play. If you get some wins as a result, this repeats but adds another row for 6. You can get the grid opened up to a maximum of 8 rows and thus 262,144 ways in play.

You can see the right hand Cleopatra's Needle has 2x, 4x, 8x etc. up to 64x on it. There are random 'X' tiles dropped in and you'll see 3 collection spaces at the bottom of reels 1, 3 and 5. Any multiplier tile landing in these will start the meter at 2x and then disappear. It will reset to the bottom after the spin ends.

If you see a Gold Bonus tile drop in, you will get 7 free drops or spins provided that it touches the left-hand Cleopatra's Needle whereupon it will begin the feature animation. You play all the free drops at maximum 8 rows and any multipliers earned don't reset until the end of the free drops. You can retrigger them the same way with a Gold Bonus tile reaching the left Needle again. Some serious potential here as you've probably worked out!

Cygnus slot has the usual smooth Elk Studios graphics, some good music and sounds and brilliant animations. Your RTP is their usual 96.10% and the game looks stunning from the outset, along with that huge potential in the exciting free drops bonus. Like many similar mechanics that tend to pile up the smaller wins within the same spins, you have to expect the obvious in that your win frequency is somewhat less than on slots you may normally play. You can hit big in the base game too though and I'll finish this review by saying that I am certainly going to be reaching for the stars again here...