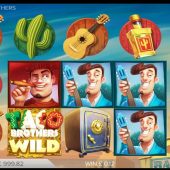 Taco Brothers slot is a festival of food - or it would be if the evil Captain Diaz wasn't going round this Mexican village of Santa Maria stealing Tacos from children and generally spoiling the fiesta of fun for everybody. Never fear though as Pasa, Pepe and Pico the Tacos Brothers are here to save the day - but will they be as kind to your balance?

On the reels...
Set in a 19th century Mexican village with the obligatory Latin acoustic guitar soundtrack we have a 243 way game of 5 reels and 3 rows and that indicates along with stacked symbols that the pays aren't going to be huge for 5-of-a-kind wins. The brothers pay 4, 3 and 1x bet respectively which is based on 100 coins. The other icons are cactus, acoustic guitar, tools and bottle which all award 0.8x bet for the 5. There are bell Wilds on the reels and as with all Elk Studios slots they pay the same as the top symbol when in a win on their own.

There are 2 Tacos Brothers logos appearing on reels 2 and 4 which will trigger a re-spin with them sticky if both appear on any spin. In order to defeat Captain Diaz and return the Tacos to Santa Maria we need safes to land on reels 1, 3 and 5 to trigger the free games.

Burrito bonus
So when the 3 safe scatters have landed they will explode and reveal either a 1, 2 or 3x multiplier for all your free games. The three Taco Brothers will all drop onto reel 5 as Wilds and migrate leftwards in a similar way to those in Wild Toro slot's feature, one reel at a time. Now Captain Diaz may appear and any Brothers in view will be locked up, and if they all are the free games end. Never fear though as there is also a Senorita who can appear and she will not only restart the free games but unlock the captive Brothers too to make the round more profitable. The bonus ends when either all three Brothers have been imprisoned or migrated off of the left of the reels.

Our View...
Taco Brothers is an entertaining slot with good ideas and graphics, even if the constant Latin guitar strumming gets a bit tiresome. You get a decent 96.30% RTP and the volatility is quite low with wins tending to be small and regular, but the Taco Brothers Wild re-spin is mostly poor and due to the distribution of the stacks only being in pairs on the best symbols the base game potential is quite small despite the 243 ways. The main free spins bonus is fun to watch but again expect little from it. I think Captain Diaz has pretty much locked up the money in Santa Maria too and so you won't leave a rich man...