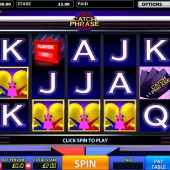 For viewers of a certain age, Sunday nights were spent sitting in front of the TV with millions of others watching hapless contestants ‘saying what they saw’ and trying to guess the various catchphrases contained within some (at times) very random cartoon images shown on-screen in the studio.

Catch Phrase had about 50 million* viewers at its peak, and slot developer Endemol Games, who know a thing or two about successful TV developments themselves, have released an online slot based on the hit TV quiz show.

The 5 reel, 20 pay-line online slot from the makers of Who Wants to Be a Millionaire has all the imagery you remember (or don’t) from the TV show, including Mr. Chips in a variety of poses, question cards, some 80s-looking 10-through-ace symbols, plus the show’s logo and the show’s presenter – but not Art James! Boooooooo!

You Won't Have to Guess What It Is!

There are no Wilds, but plenty of bonus Scatters – three in total, in fact. Three or more Catch Phrase Bonus symbols anywhere on the reels will trigger the game’s first bonus. See if you can answer the catchphrases before your opponent does over five rounds, and earn yourself a juicy bonus in the process. Unfortunately, you won’t actually guess the answer; you just have to stop the spinning wheel to see if your player answers correctly.

It's the Ready Money Bonus Round!

Next up is a free spins round – the Ready Money Bonus – triggered by three or more relevant Bonus symbols anywhere on the reels. First you’ll have to choose from nine squares to find out how many spins you’ve won, and what multiplier is being applied to them.

Finally, the Super Catch Phrase Bonus game is activated by hitting three or more relevant bonus Scatters anywhere on the reels. Essentially a Trail Bonus type game, you’ll see the Catch Phrase game board on-screen, and you have to collect letters in order to make a path across the Catch Phrase board. You have five chances to collect all letters, and each letter revealed increases the pay award to the next level.

For fans of the original show, and general fans of gameshow-themed slots, check out some of Openbet’s offerings, as they obviously have a good grip on retro quiz adaptations. Their Blockbusters game, based on the classic post-school quiz show, and Blankety Blank, the ‘80s BBC quiz show-inspired slot, are good places to start.