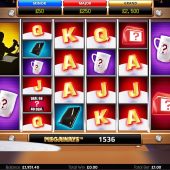 Deal or no Deal Bankers Riches Megaways slot by Endemol Shine is the third in the DOND range but this time not by Blueprint Gaming as are the other two, Deal or no Deal Megaways slot and the later version of Deal or no Deal Megaways The Golden Box slot. Gamesys actually made the first well known DOND game simply called Deal or no Deal and followed it with the namesake of this, Deal or No Deal The Banker's Riches slot. The licensed theme means the games all share pretty similar backgrounds, red borders and common symbols and this is no different with the calming music thrown in for the soundtrack too. So is this a banker for a growing bankroll or will his riches evade our lucky boxes?

On the reels...
There is no top scroll here on Deal or no Deal Bankers Riches Megaways slot and 2-7 rows for each of the 6 reels means 64-117649 ways to win. Symbols are stacked, logo Wilds appear singly on all reels bar the first and Telephone scatters on all reels. There's no modifiers although it makes a big deal of it (no pun etc...) when the maximum Megaways spin is going to occur with an animation. The 6-of-a-kind pays are Gold Box 25x stake, Red Box 5x, Banker or Wax Seal 2x, Notepad 1.5x, Cup 1.25x with four card values of 1 down to 0.6x. There's quite a varying feature here though with a few different outcomes.

Features
Landing 3 or more Phones will trigger a pick-me of them. You get 1-10x for each box until you reveal a feature which can be:
Banker's Best Offer - this is a series of 10 cash amounts from 1-20x bet. You start at the top amount and can reject or take it until you get to the bottom and the final one will be forced upon you. If you get 13 or 14x at any stage, advisable to take it but you may get the JACKPOT offer.
Free Spins - these are unlimited with an increasing multiplier for each winning tumble. They stop when you land a special Phone on reel 6. When they do, there is one final spin at full 117649 Megaways which if you have a good multiplier and it actually pays (often it won't!) it can make or break your bonus. Now you have a choice of opening Box 23 which is a gamble offering either a 100, 50 or 25% raise of your total winnings, quits, lose 50% or lose all. This Box 23 is only offered if you've won a return in the free games. You can use it up to 3 times too as long as you haven't lost all.
Deal or no Deal - pick a box and receive cash offers as boxes are eliminated. If you go to the end you get what's in your box. There may be a JACKPOT value in which case you go to another game.
Jackpot Game - you can get this from the above feature, direct from the triggering scatter picks and also the Banker's Best Offer feature. Pick boxes until 3 identical values are revealed: Minor 50x bet, Major 250x bet or Grand at 2,500x bet.

Our View...
Deal or no Deal Bankers Riches Megaways slot has a 95.86% RTP and is not hugely volatile with frequent small to medium wins in the base game and regular features. The Jackpot Game and Free Spins can pay well but you won't be winning thousands times bet here without the grand jackpot or a very lucky Megaways free spin. The game is smooth to play if a little busy with all the bright symbols and it's good on the ears. So essentially you have a trade off choosing this game - more features and fun with less potential, or the opposite for the other DOND Megaways slots mentioned in the first paragraph. For me, this is the best one of the lot...