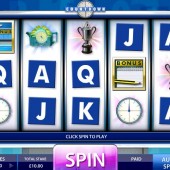 Countdown is one of the most famous weekday programmes in the UK and its online slot release by Endemol Games means that players all over the world now have a chance to experience the thrill of the popular numbers and words quiz show.

Fans of the show will immediately recognize the logo and the reels use the same color scheme that the show uses. If you are a lover of the television quiz show slots such as 100,000 Pyramid by IGT and Catch Phrase which is another release by Endemol Games then you are sure you enjoy this slot that has a similar quiz-to-show transformation about itself.

Symbols across the reels in this 5 reel, 20 pay-line slot include the famous Countdown clock, the Countdown trophy and a dictionary. There are several Bonus symbols in the game and these consist of the pencil and paper icon, the Countdown numbers board and the sexy female presenter in front of the Letters Board. In real life, she is played by the amorous Rachel Riley. Unfortunately, she is not used in this slot but the presenter is still blonde with long legs and curves in all the naughty places!

The Countdown clock symbol represents the Wild in this slot and it can substitute for any other symbol, except for the Bonus symbols, to complete winning combinations and give you the chance to win some prizes. If you hit five Wild symbols across the reels then you can win up to 5,000x your bet.

The three Bonus symbols in the slot all trigger a different bonus feature. If you hit three or more of the numbers board symbol then you will trigger the Numbers Board Bonus. In this bonus, you will have to pick 6 cards from a selection of 28 cards that are face down to reveal a set of numbers just as players must do in the television programme. The slot will then take the numbers you have, form an equation and reveal a number of free spins and a multiplier value.

Back Your Contestant to Win a Prize

The second bonus feature is triggered when you hit three or more of the Letters Board symbols across the reels. Once triggered, you will be taken to a second screen displaying two contestants and a set of letters. You must then press reveal and if the red player comes up with the longest word using those letters then you win a prize. You will have five attempts to win prizes during this bonus.

Figure Out the Countdown Conundrum to Win Big

The final bonus is triggered if you hit three or more of pencil and paper symbols across the reels. This will trigger the Countdown Conundrum Bonus. In this bonus, you are shown the word Countdown on the panel of letters with all the letters except the Os and U missing. You must then spin a wheel and try to add the required letters to the panel of letters to complete the word Countdown within five spins of the wheel.

Countdown is somewhat of a British institution. Its presenters have earned cult status and the programme is the guilty pleasure of millions of viewers across the country. It was only a matter of time before a slot of the programme was released and it is pleasantly surprising to see that not only is it a decent slot but it also does not stray too far away from the format of the show. Good work Endemol!