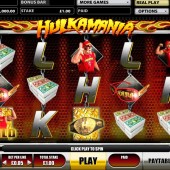 I’ve never been a fan of wrestling – vague childhood memories of Giant Haystacks and the Undertaker aside – but when it comes to online slots, something inside me makes me want to hunt out the latest wrestling offering.

Slot developer Endemol Games – responsible for successful adaptations of TV game shows like The Million Pound Drop slot and Catchphrase slot – have turned their attention to WWF (or WWE as it’s now known) with Hulkamania, a homage to the legendary wrestler, Hulk Hogan.

Hogan is a 12-time wrestling champion and the second longest-reigning WWF Champion of all time. He’s also an actor and has appeared in some of the worst films ever committed to celluloid.

But that’s an angle for another day. This is all about Hulk’s legendary wrestling career, which has has been celebrated in this 5 reel, 20 pay-line slot. There are a tonne of Hulk symbols for die-hard fans, some neat cutaway video footage of the great man, and some killer bonus rounds for slots fans of every persuasion.

The reels are typically full of Hogan imagery, including his famous Rayban shades, wads of cash, the letters from Hulk’s name, an arm wrestling contest in close-up, gold bars and an amusing gold coin from ‘the Republic of Hulkamania’.

Hulkamania's Gonna Run Wild On You!

The Wild symbol substitutes for all regular symbols other than the Bonus Scatters. As with Million Pound Drop, there’s a Golden Wild symbol which appears on reel 3 only and changes four other random symbols (as well as itself) Wild. Not only does it crop up fairly regularly, it also can appear in the free spins, bringing you even more wins. Three Arm Wrestling Scatters on reels 2, 3 and 4 triggers the Arm Wrestling Bonus.

Take On The Hulkster

You’ll take on the man and his handlebar moustache in an arm wrestling contest in order to win free spins. You won’t actually have to wrestle the man, of course – just punch some buttons at the bottom of the screen to choose moves.

Three Hulkamania Belt symbols on reels 1, 3 and 5, meanwhile, triggers the Big Fight Bonus. Here you get to help Hulk beat his wrestling opponent in the ring to win yourself some big cash prizes. The spinning reel at the bottom of the screen has moves for both Hulk and his hefty opponent – stop the wheel spinning to see who wins. Depending on the outcome of the fight, you’ll win yourself a cash bonus.

Endemol have released yet another nice big-name tie-in. There are loads of nice Wild wins, and the free spins round can really pay out; I managed to get about 20 free spins the few times I hit the arm wrestling bonus round, despite the bonus being a bit tricky to trigger to start with.

Good features can be had at either of the tie-in slots I mentioned at the top of the review, and more fighting mayhem can be found at UFC, the MMA-themed slot from the same developer, while Fisticuffs, the old-school boxing video slot from NetEnt, is great for a light-hearted take on the fighting slot.