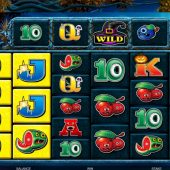 Reel Spooky King Megaways slot by Inspired Gaming is their third version of the same Reel King Megaways game. Yes, another clone that has nothing of the fun and excitement of say their Centurion Megaways slot. Again it's a version of the old UK arcade £500 jackpot Reel King originally by Astra Games, subsequently put online by Novomatic. We had the Christmas copy in Santa King Megaways slot so I suppose it would be inevitable we'd get the Halloween version we have here. Please don't tell me we'll get an Easter bunny version next! So same old dings, symbols and background and therefore no change to the chances of old for our bankroll here.

On The Reels...
We get 6 reels of 2-7 tiles so 324-117649 ways on Reel Spooky King Megaways slot with the 6-of-a-kinds pays again the same as Bonanza Megaways. Best is the Cauldron at 50x stake, then Ace at 7.5x, K/Q 2x, J/10 1.75x, 9/Melon 1x and finally the Plum at 0.9x and Cherry at 0.8x. There are no scatters because we trigger progressively and Wilds appear solely on the top reel of 4 symbols. Winning symbols get removed for replacements which tumble down from above. No modifiers are present by the way.

Our View...
Reel Spooky King Megaways has a 95.56% RTP and retains the dated and basic graphics, sounds and animations. Good base game hits aren't common and it's frustrating continuously falling one short of the 6 yellow reels! On the minimum 6-Ding trigger, if you only get a single Reel King mini slot it's almost sure you will fail to land the 4 yellow spins required in order to hit the lowest amount of 8 free spins on the trail. All you'll end up with is a poor cash pay averaging about 10x. Take only 8 free spins, you'll use most or all of them before accumulating the 6 red reels and then you're left with insufficient spins to retrigger the reds. You really won't have a chance here unless a minimum of 12 spins is earned, and that my friends is quite hard to do. I'm afraid this is one game that won't frighten me out of money this Halloween...