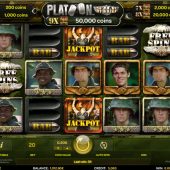 Gaming software developer iSoftBet has continued their war movie-themed slots range by adding Platoon Wild to their portfolio. Let us not forget their slightly muted Platoon slot, which didn't quite capture the imagination the company might have expected it to. Just like the previous release, Platoon Wild is based on the the 1986 film 'Platoon', directed by Oliver Stone and starring Tom Berenger, Willem Dafoe, and Charlie Sheen whom the character symbols depict. We have the rather grim theme of the Vietnam War, so does the game allow us to see beyond this?

The screen is 20 lines across a 5-reel 3-row standard format, and unlike many games Platoon Wild doesn't inflict A,K,Q etc. on you for the rank and file symbols, but has 1,2 or 3 bullets which can also pay mixed in any combination.  Mr.Sheen himself will clean up a tidy 40x stake for 5-of-a-kind (5OAK) and the lowest mixed bullets 1x stake for 5OAK.

We have a wild symbol on all reels which doesn't multiply or substitute for the two kinds of scatters. The first scatter type will trigger (never has that term been more appropriate for a slot!)  8 free spins should 3 fall in view anywhere. This is a simple engagement with a 2x multiplier on all wins and retriggers are possible. When 2 scatters fall the remaining reels are 'napalmed' and slow down for the heartstopper - the interesting thing here is that the reel the third scatter lands on will slow down far more noticeably than usual when the scatter is going to drop!

Extra Bonus feature that can do some damage

There is big potential in this game mainly due to the 'jackpot scatters' incorporated into the reels. Unlike the other symbols these can appear more than once in the window on the same reel. These are no phantom symbols and come in regularly in small numbers which is good because 3 will pay 1x stake and 4 pay 5x stake. Now the real cluster bomb here is landing 8 for a handsome 1000x stake and you could even go one better and hit 9 for the highest pay attainable, a massive 2500x stake!

This game, depsite the large wins possible, is quite gentle in normal play and small wins are very regular and the feature is certainly not well camouflaged. The graphics are very good and the sound effects and music don't land you straight into a war of attrition like some games do. Once Saigon and typed this up, hell I may even take a spin myself..... If you are a fan of movie-themed slots then you may be interested in iSoftBet's Basic Instinct or their action movie-themed Rambo slot.