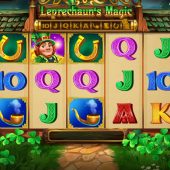 Sheriff of Nottingham slot by iSoftBet returns us to the medieval surroundings of Sherwood Forest as so many games before have done. We have gentle music from the period, a forest background with the familiar castle under our buttons on the right. We have seen many a decent slot in the past using this theme, Netent's Robin Hood Shifting Riches being possibly the best but also a credit here to Incredible Technologies' old game Robin Hood – Riches of Sherwood Forest. In either case, they are superior to Novomatic's tedious Sherwood Showdown so how much of our bankroll will the greedy Sheriff take this time?

We get 25 fixed lines on Sheriff of Nottingham slot with the Sheriff Wild paying 20x bet for 5-of-a-kind. Other symbols can appear stacked with Gold Cross 16x, Swords 12x, Helmet 8x, Scroll 6x and four card values paying 4 ro 2x for a full line. You get bonus scatters on the odd reels and Wanted Characters can appear anywhere in the form of Robin or his Merry Men with hidden stake multipliers. On top of this we get some pretty fun random modifiers!

On any spin, the screen may offer up 3 wax-sealed Royal Letters. Pick one to get one of these modifiers:
Wanted Spin - 3 or 4 Merry Men will land and so will the Sheriff which activates their stake multipliers.
Bonus Add - more scatters added to reels to greatly increase chances of a bonus trigger.
Sheriff Wilds - super stacked Wilds added to reels.
Win Spin - Gold Coins added to grid which will all reveal the same paying symbol to guarantee a win.

You need to land 5 or more Merry Men symbols to trigger 3 re-spins. Each further one landing resets the re-spins to 3 and so-on. At the end, all will reveal their stake multipliers which are paid. If you see the Sheriff appear at any time, they get paid early which then frees up their positions again to increase the chances of landing more and more.

You need the Bonus symbols on reels 1, 3 and 5 to trigger 8 free games. No retriggers and your enhancement is Twin Spin slot's feature whereby you are guaranteed 2 or more reels per spin to conjoin and land with the same symbols in view. So 4 or 5 could pay well!

Sheriff of Nottingham slot is colourful with nice graphics and animations and no irritating music. There's plenty going on with the modifiers reasonably frequent and these can yield some good wins. Your RTP is 96.20% so not bad in that respect and it's possible to get those Wanted Merry Men with rewards up to 1000x bet although I wouldn't hold your breath for any over the second highest, 50x! The free games are hit-and-miss really with good potential if you get the rarer 5-reel clones but will normally pay a nice top-up to your balance. Sherwood Forest may be a little safer than you think to visit nowadays...