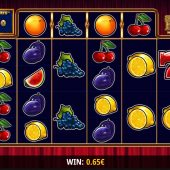 Shining King Megaways slot by iSoftBet takes us back into the past in more ways than one. Firstly, we have retro sounds, symbols and appearance and secondly, the game reverts to a tried and tested old Megaways mechanic. Let's say right now that the pays are the same as Bonanza slot, the modifier added into the equation means Diamond Mine slot and finally, the frequency of maximum-ways spins in the feature brings Who Wants to be a Millionaire Megaways slot to mind. So will we add a king sized win to our bankroll or will this game not take a shine to us?

On the Reels...
There are 6 reels of 2-7 rows each with a scrolling reel over the centre on Shining King Megaways slot. This means 324-117649-ways per spin, with the Wild only appearing on the scrolling row. Symbols can be stacked on the main reels and the 6-of-a-kind pays are 7's 50x bet, $ 7.5x, Star or Bell 2x and six card values paying 1.75 down to 0.8x for a full way of 6. Winning symbols are replaced from above, as usual. You get Crown scatters on all reels and Mystery Question Marks can appear anywhere which all reveal the same symbol from the pay table. That's it.

Free Games
Four scatters awards 12 free spins with each one over four adding 5 extra, maximum 27. Scatters now only appear, like Wilds, on the scrolling row above the middle 4 reels, where 3 or 4 will award 5 or 10 extr spins respectively. There is an increasing multiplier for each winning tumble, carried over across the whole bonus. You seem to get quite frequent full-reel 117649-way spins in this bonus, unlike Bonanza.

Our View...
Shining King Megaways slot is not good at all. You can't fault the mechanic as it's popular and been done many a time before, but that's exactly what's wrong with the game. The retro appearance does nothing for any slot, if the game is simply copying a similar model which looks and feels far more modern. You can buy the feature for 75x bet in some jurisdictions which is volatile as we all know and may award 4-figure wins but that's a rarity. The name baffles me as there are no King symbols anywhere although I suppose the Crown scatter alludes to royalty. I didn't take a shine to this game at all...