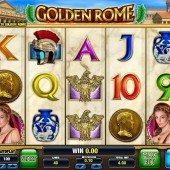 If I had $1 for every Roman-themed slot I reviewed over the years then I am pretty sure I would be well on my way to an easy fortune. As you can imagine, I am not surprised by this slot landing on my desktop!

Online slot developer Leander Games is following the trail already trekked by other slot developers such as WMS Gaming with their Spartacus – Gladiator of Rome slot and Playtech with their Gladiator slot by releasing this Roman-themed effort.

I won’t lie, there is not anything that really stands out from the rest of the crowd and you really could just have put any Roman-themed slot in front of me and the only way I could tell the difference is probably that the others would be more entertaining.

Considering this has been released after a long line of Roman-themed online slots then you would be forgiven for expecting more. The symbols are your usual Caesar, Coliseum, Centurion helmet, Roman vase, a Roman coin, a Roman banner, a sexy Roman lady and other such Roman-type things. Fail for Leander Games on the originality scale. Although, fair play, the graphics do look slick.

Golden Rome is a 5 reel, 40 pay-line slot that is your run-of-the-mill slot. Caesar acts as an expanding Wild which can add some excitement to proceedings. He is this stern and brooding looking guy who looks more like a model than the leader of the greatest Empire to grace the Earth. He appears on the three central reels and the wins are decent enough when he pops up but they are more frequent and smaller than on other slots with expanding Wilds.

If there was an archetypal slot game then I would probably put this slot forward as my case study. It has your classic Roman theme. There is a Wild symbol. There is even a free spins bonus round. That’s about it. No messing about. You can definitely say that this slot will not transform the slots landscape but you can get a certain amount of enjoyment from it. It’s not a revolutionary release from Leander Games but it’s not disastrous. It’s just… well… meh.