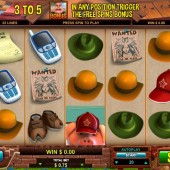 Online slot developer Leander Games, who give Sheriff and Betsoft a good run for their money in the 3D slots stakes, have been at it again, this time with a comedy take on the classic Three Little Pigs children’s story.

Little Pigs Strike Back, a 5 reel, 25 pay-line slot, has fixed betting, so it probably will appeal to those with medium-big sized pockets. However if you’ve ever played some of Sheriff’s cutesy animal-themed slots like the frantic Lucky Farmer or the equally chaotic Fortune Farm, you’ll get a kick out of this. It is a little something different, it doesn't take itself too seriously and if you fancy a chilled out slots experience with a bit of laughter thrown in then get yourself involved.

The pigs are being terrorized by the big, bad wolf – so badly, in fact, that they’ve had to get the local sheriff on the case. On the reels, therefore, the sheriff takes a key role, while elsewhere there are the pigs’ shoes, a police report, and a Wanted poster showing the dastardly wolf, ready to huff and puff and blow the piggies’ houses in.

There’s an interesting addition to the base game – the Entire Reel Wild feature – with certain pig symbols taking up three spots on the reel. If they land on the reels in the right place the entire reel will turn Wild.

Three or more Sheriff bonus icons triggers a free spins round with 10 to 30 spins up for grabs depending on how many bonus symbols you hit on the reels. During the free spins round, however, if a part of the full pig appears on the screen, it will ‘nudge’ up the screen to fill the entire reel, making it Wild in the process.

Leander Games have released a whole raft of new games recently, and Little Pigs is yet more proof that they know their slots audience inside out. Leander don’t really do humdrum games, and this should be added to your list of must-plays if you’re looking for something different.