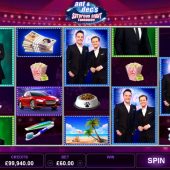 Ant and Dec's Saturday Night Takeaway slot was one I was putting off reviewing, like one would a dentist's appointment or a colonoscopy. Firstly, because it's by Microgaming who seem to have run out of any ideas and simply copy and paste elements of existing games together (or just copy an older one outright) and secondly the subject matter - not exactly my cup of tea. If you live in the UK and are unfortunate enough to watch TV at the wrong time, you may catch sight of 'Ant and Dec' under the guise of 'Family Entertainment' which in itself is not a huge problem; that's why remote controls were invented but alas, like 'Jedward' at one time, they seem to be everywhere and causing misery to more and more people each week. At this stage I would normally say "Theme dodgy, but it's the slot that matters" and optimistically look for good game mechanics to alleviate the sense of impending doom but as I said, it's Microgaming so now I'm utterly despondent. So do the Gibbering Geordies have any redeeming features (no pun intended) for this slot?

Upon opening the 5-reel and 4-row game you get the pair excitedly announcing "Welcome to Saturday Night Takeaway" and are faced with 40 pay lines on which the Ant and Dec character icons are stacked 2 rows high. Then the predictable music starts that you presumably get on the show, a relentless 60 beats a minute drum and bass loop to which no doubt the whipped-up audience will be enthusiastically clapping away accompanied by bright flashing studio lights to veneer over the dismal content. I would advise you to mute this dreadful racket before continuing to the game - it really is irksome.

The game is very nearly a clone of Microgaming's Tarzan slot and the Dreadful Duo already appear in another Microgaming slot, I'm A Celebrity Get Me Outta Here which I will tell you already is a far superior game to this, as we will see. Like Tarzan we have stacked Wilds on all reels with the game's logo and these offer the highest 5-of-a-kind award at 15x stake, followed by Ant and/or Dec symbols at 12.5 and 7.5x bet respectively. The lowest pays are the pop corn, toothbrush, dog bowl and appropriately toilet roll at 4x stake for 5. There are 'grid' scatters of a 5x3 set of squares and you need 3 or more of these to trigger the bonus feature, preferably 5 as you will get a nice 100x bet award for them! I also though it worth mentioning that Microgaming seem to have copied the sound of scatter icons landing from RTG slots - it's exactly the same on all older RTG games and now you have it here.

When landing 3 or more scatters you trigger a blue screen of a 3x5 grid of squares called the 'Ads Board'. Ten of these will be cash x stake awards of 2-20 and one will be the game's jackpot amount (not a pooled one but this may be avaiable to be integrated) while the other 4 squares each have one of two free spins types and one of two pick-me type games. Before the game reveals to you which on the 15 squares you have uncovered you need to press the button to start a raffle barrel rolling on the right of the grid. This has 4 outcomes: half the 10 cash prizes will be doubled, all will be doubled, half will be tripled and lastly all will be tripled. Why this is necessary I do not know, as the game could simply impose those values in the first place!

So if you are lucky enough to actually get one of the 4 features after waiting a while to trigger the bonus, and do not get fobbed-off with a paltry cash award, this is what you can expect:

Ant and Dec 10 free spins - you can retrigger these and you get even more of the due added to the reels in stacks. Ant is stacked on reels 1 and 2, Dec on reels 4 and 5 and the middle one has a stack of them together. The middle one can substitute for either Ant or Dec which is because in these games the reels pay both ways, left-to-right and right-to-left.

Get Out of Me Ear 10 free spins - in these you get super stacked Wilds, increasing by one each spin. You start with the basic 4 rows-high Wild stack and thus by the last spin you will have stacks 13-rows high on each reel, same as the Sofia feature in Playboy slot and similarly there can be no retriggers.

End of The Show Bonus - pick from tiles to reveal Ant and Decs in various costumes. Each pair pays a cash award and you may pick one of two possible reveals that has a multiplier to apply to your total.

Best Bits Bonus - an absolutely insufferable game whereby you choose film clips of them which have a hidden cash award attached. If you're lucky, as you can't stop the clips from playing, you'll pick the one with a red 'X' (which ends the round) very early on.

Ant And Dec's Saturday Night Takeaway slot is really crushingly boring. Okay, okay I may not be a great fan of the subject matter but (honestly!) I would put that to one side if the game mechanics were good - but they aren't. It's simply Tarzan slot, but with different bonus round graphics and alterations. And unfortunately Tarzan was not good. The reason why mainly is that you wait a while to trigger the bonus and there is no guarantee of any free spins or even one of the tedious pick-me bonuses. The majority of the time you are palmed off with a silly cash award which simply creates a sense of frustration with the game. You have a decent 96.30% RTP and can theoretically hit 600x bet with a screen of stacked Wilds in the base game, but hits of over 10x bet are rare. The music is simply intolerable and draining to listen to and if you mute it then you mute all the game's sounds as the settings have been reduced for the html5 mobile platforms. I can think of numerous concluding witticisms around the word 'takeaway' but let it suffice for me to say that this slot is one which will never, ever appear on my screen...