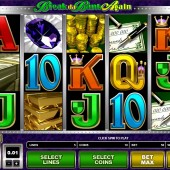 Break Da Bank Again or BDBA as it is commonly called online is a 9 line, 5 reel slot from Microgaming. It is the follow up to the extremely popular 3 reel Break the Bank slot, which plays very much like the European AWP (amusements with prizes) machines. How this slightly innocuous looking slot game became so popular is difficult to understand when you look at it for the first time. However, it soon becomes clear that its volatile nature is a major draw for some players. It is up there with Isis as being one of the most volatile of the Microgaming slots, which is going some when you consider the hundreds of slot games this company has produced.

The two main symbols to look out for while playing Break Da Bank Again are the BDBA symbol and the vault symbol (which is the scatter). Any wins including a BDBA symbol will be multiplied by 5x in the normal game. This can increase up to 25x if they appear on multiple reels during the bonus round.

If you land three or more of the vault scatters then you will release 15 free spins, with all wins paying a minimum of 5x. Every time a vault symbol appears during the bonus round you will get an extra free spin. As you might be working out, the bonus round can be very rewarding and it is definitely something players will play this game for.

Although Break Da Bank Again can be a very lucrative slot at times, my general feeling is that it has been over-hyped. Personally I have only really experienced a few big wins on this slot and they have all come from the bonus round. Wins in the regular game seem to always come in at around 5-10x, not really making any positive gains in bankroll. Maybe you should judge for yourself, but I am sure you will end up heading over to the Hitman slot or the less volatile Dark Knight slot.