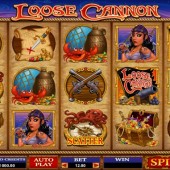 Geargh! It’s another maritime-themed slot from online slot developer Microgaming me hearties! So set sail and prepare to experience the seven seas and a filthy wench me land lubber.

Ok, so I’m not actually a pirate as you can tell but don’t let that stop you from getting into pirate mode for this 5 reel, 243 ways to win release by Microgaming. The renowned developer has form in this field of slots with the exciting Cannonball Bay slot and the sea-faring Age of Discovery slot both examples of fine slots in the Microgaming portfolio.

Loose Cannon is slightly more raucous than those two slots. In fact, if Captain Jack Black was going to be found gambling on the slots then it would probably be this slot rather than the other more conservative maritime slots out there.

The reels are rammed with pirate-related symbols such as male and female pirates (yes, apparently female pirates do exist other than in the form of Penelope Cruz!), a treasure chest, a treasure map, some rum (geargh!!!) and a monkey with a cannonball (we will avoid talking about the breaches of health and safety there!).

Fire the Wild at Will!

The Wild symbol is represented by the pirate ship with the word “Wild” on its sails. This substitutes for all other symbols, except for the Scatters, to complete winning combinations. In addition, if you hit one of the Wild symbols on reel 3 then the entire reel will turn Wild thanks to the Stacked Wilds feature. Once the entire reel has turned Wild, the pirate ships in the Wild symbol will fire cannonballs across the reels turning random symbols Wild. This is Wild carnage on an epic level!

Loose Cannon is a slot to get playing right now because the Stacked Wilds feature is like a double feature in one. The fact that the entire reel turns Wild should be enough but Microgaming have done a wonder by making the pirate ships on the Wild symbols to then fire cannonballs across the reels to turn even more symbols Wild. I’ve been playing Loose Cannon since it came out. I just cannot get enough of it.