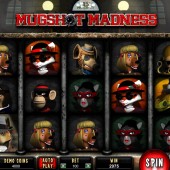 I reviewed a fun little slot from Blueprint recently – Cop the Lot. Taking a Keystone Cops-style angle on the crime-themed slot it was full of comedy and bonus features, and if you like the comic angle of that slot but prefer the big 3D graphics of games like Sheriff’s Piggy Bank or NetEnt’s violent and immersive Scarface slot, you might like this effort from Microgaming.

With graphics more attuned to a Betsoft Gaming 3D slot or Sheriff Gaming joint, but with the humor ramped up, Mugshot Madness is a 5 reel, 20 pay-line online video slot that doffs its over-sized trilby to the 1950s era of gangsters, molls and big cars.

The criminals in this slot, however, are animals, with cool cats, dodgy-looking foxes and dogs in trench coats. Elsewhere on the reels there’s a buzzard Judge, and Octopus kingpin, crocodiles, monkeys and rhinos.

Detective Jack Murphy, our chief crime-busting pooch, is the game’s Wild icon, and he substitutes for all regular symbols other than the Scatters. Not only that, he also adds a multiplier of two to every winning combo he helps form.

Find the Sheriff's Badge to Win up to 25 Free Spins

The Sheriff’s Badge is the Scatter, and three or more of those will trigger the bonus Line-Up feature. Depending on how many Scatters you landed in order to activate the bonus round, you will win 10, 15, or 25 free spins, but here’s where the bonus round gets interesting.

Capture Criminals to Earn up to a 10x Multiplier

Criminals are “captured” when their symbol forms part of a winning combo during free spins. The bad guys can only be caught one time during the feature and when they are their symbol is replaced with a black and white mugshot. Multipliers are then attached to wins (anything from 1x), with the biggest reward a 10x multiplier.

With some seriously nice graphics and an interesting spin on the free spins bonus round, slot developer Microgaming’s venture into Betsoft Gaming territory has been pulled off with some success. It’s worth noting that the pay-lines – all 20 of them – are fixed in the game, so you’ll be praying for some free spins action to outweigh the rather budget-busting variance. When you do, though, you’ll be laughing all the way to the bank(job).