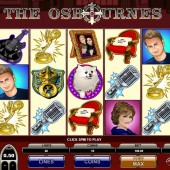 A flurry of colours, music, lovable animated dogs, and scary gargoyles: not one of Ozzy Osbourne’s acid flashbacks, but rather a few of the more interesting features in Microgaming’s reality TV-themed slot, The Osbournes, based on the aging British rocker’s ‘rockumentary’ series of the same name.

Online slot developer Microgaming’s 5-reel, 20-payline slot has a 200 coin maximum bet and some massive potential payouts, so if the Gods of Rock are with you, it could bring you a little closer to the wild lifestyle featured in the show. Luckily, the gameplay isn’t as dysfunctional as the family shown in the iconic series.

To start with, the music and graphics put us right in the heart of the Prince of Darkness’s world – a constant rock soundtrack adds to the atmosphere, as do the many rock-related symbols like mics, guitars, awards, statuettes and portraits of the family members themselves.

The Wild is the Osbournes logo and replaces all other symbols other than the Scatters. Get those Osbournes badges and you could be turning your winnings all the way up to 11 (quirky reference for Spinal Tap fans there).

And if killer riffs were a common theme of Ozzy’s music career, then killer jackpots are the name of the game in this slot. In fact, the bonuses and bets in this game are as big as a Tony Iommi guitar solo. In the basic game, a 75,000 coin jackpot is up for grabs (150,000 in the Free Spins Bonus), with plenty more available in the slot’s other bonuses.

First up is Mini’s Free Spin Bonus, featuring the family’s pet dog. Getting two or more Mini Scatters anywhere on the reels will win you rewards, but get three or more Mini symbols and the lovable pooch’s bonus feature will be triggered. Here, 10 free spins are awarded giving double payouts on all winning lines.

Grab a Gift gives you the chance of winning up to 6,000 coins when you choose one of the attractive hidden gifts in front of you. Each family member is represented here, including Ozzy himself, Sharon, Jack and Kelly, and each family member has a gift with a different multiplier reward. And finally, the Knock Knock Bonus multiplies your winnings up to 5x when you choose a random gargoyle door knocker.

Slots based on popular TV shows are in abundance, of course. Online slot developer Ash Gaming’s reality TV themed X Factor slot, based on the music reality show, is as good a game as any to try out if you enjoy The Osbournes, and metal heads looking for more adrenaline in their games should play developer Leander Gaming’s hardcore Megadeth slot, dedicated to the iconic heavy metal band. For fans of The Osbournes TV show – and we’re certainly in that camp – there’s plenty to love about a game that’s totally in keeping with the light-hearted nature and irreverence that kept us glued to our sets for so long. Fans of simple gameplay will love it too. Altogether now – "ROCK AND ROLLLL!"