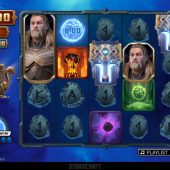 Thunderstruck Wild Lightning slot by Microgaming via partner studio Stormcraft is what will probably be known as Thunderstuck 3. Originally we had the classic Thunderstuck slot with its 9-line volatility followed by the graphically superior and less volatile 243-way Thunderstruck 2 slot. Here we get a night sky background, the expected Norse symbols and runes with the best thing being the soundtrack, which like the brilliant Immortal Romance slot has been created professionally for the game in a series of proper songs. So can lightning strike our bankroll here or will it be crushed under Thor's mighty hammer?

On the reels...
We begin on Thunderstruck Wild Lightning slot with 5 reels of 4 rows and 40 pay lines and single symbols bar the Wilds which can appear stacked and will multiply your win by 2 or 5x and if lucky enough to get 5-of-a-kind, pay 200x bet the same as the other top pay for 5 scatters. The rest of the 5OAK wins pay 25x stake Lava Bomb, 15x Gold Crystal, 12.5x Green, 6x Blue, 5x Purple with six card value Runes of 3x or 2x for a full line.

Wildstorm Feature
The game has tried to follow the structure of Thunderstruck 2 but your Wildstorm random Wild reels feature has a different feel as it has to be activated by collecting 20 spins where you only get 2 scatters in view just to activate the chance of it occurring. It can pay up to 5 reels as before which would pay 8,000x bet in this case and if it pays nothing, your 20-scatter meter will remain filled, otherwise it resets.

Free Games
Before, on Thunderstruck 2, you had to unlock 4 very different feature mechanics by collecting 5, 10 and 15 free spins triggers. You unlocked the second, third and fourth on those numbers respectively. Only the first 5x Spins could retrigger but here they all can. That's because all the 4 rounds are basically the same using an old formula seen on slots like WMS' Wishing You Fortune where you choose the number of spins and Wild multiplier ranges. You need 3 or more Valhalla scatters in view to begin. The only 'extra' we see is that on all of them, a Wild appearing will leave a highlight around its position for the duration and should another Wild land there afterwards, it will expand. The game may award one or more random highlight positions before the round begins. You only get one multiplier, the highest, even if you land 2 or more Wilds in a spin. The options are:
Jotunheim - this is the default round before you unlock the rest and there are 15 spins with Wilds paying at 2, 3 or 5x.
Vanaheim - after 5 triggers awards 12 spins, Wilds 2, 4 or 6x.
Alfheim - after 10 triggers awards 9 spins, Wilds 3, 5 or 8x.
Nidavellir - after 15 triggers awards 6 spins, Wilds 5, 8 or 12x.

Link and Win
Yes, we have this tired old mechanic too on Thunderstruck Wild Lightning slot. You get Thunderball symbols on all reels with cash multipliers overlaid. Land 6+ and you will see them freeze in position with the rest of the tiles blank. Then 3 re-spins occur which reset every time another appears. If you get 15 out of the 20 positions filled, you unlock another row of 5 places. 20 unlocks the 6th. row, 25 the 7th. row and finally 30 the full 40-postion 8-row grid. Jackpot values can land of 25, 50 or 150x bet for the Mini, Minor and Major. If you fill the whole 8 rows up with Thunderballs, the Mega fixed jackpot of 15,000x bet is yours.

Our View...
Thunderstruck Wild Lightning slot has a RTP of 96.10% and is supposedly a high volatility game. Stormcraft have tried hard with this slot, they really have judging by the animations and music created but as usual with latter-day Microgaming editions created by partner studios, originality is totally lacking. Yes, they retained the popular Wildstorm but put a collection there to even activate it which can take hundreds of spins each time so removed the chance of it occurring on ANY particular spin!
The free games retain the cumulative trigger unlocking but are simply all of the same format, copied from many other slots. The same goes for the totally unnecessary Link and Win feature which seems to have seriously reduced the average pay for the free spin bonuses, which after all are the main source of enjoyment for the player. I appreciate that Stormcraft had to change some things whilst retaining others to make this Thunderstruck 3 seem new and exciting but as usual Microgaming have produced a game that uses a hotchpotch of imitated parts and players aren't stupid. Why not ditch the Link and Win and create 2 or 3 new kinds of feature types in the 4 available? I guess only God, or in this case Thor knows...