Titans of the Sun – Theia slot 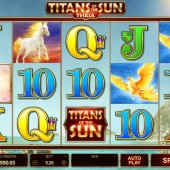 If you think that you've seen Titans of the Sun – Theia before then you'd not be treated like a fool because renowned slots developer Microgaming released it at the same time as its brother title called Titans of the Sun – Hyperion. I'm not going to lie, I thought there would be a lot of differences to the games because usually that's what happens with dual releases but I'm still scratching my head to work out why they released the two slots instead of merging them into one big game.

Ok, that's a lie. I do know. It's clearly money. Titans of the Sun – Theia is a 5 reel, 15 payline slot that focuses on the Greek mythological Titaness of the same name. She was the partner (and sister!) of Hyperion and was the mother of Helios (the sun), Eos (the dawn), and Selene (the moon). The immediate difference I can see between this slot and the Hyperion version is that you can win up to 120,000 coins on this slot.

The symbols are identical to the Hyperion version, except for the fact that instead of Hyperion on the reels we have Theia. Yes, it is that similar. There's the fiery horse, fiery bird, and the regular 10-through-to-Ace symbols.

The Wild is once again represented by the Titans of the Sun logo. It also substitutes for all other symbols, except for the Scatters, to complete any potential winning combinations that might appear on the reels.

There are the Mystery Symbols once again. These are again shown on the reels as the golden sun symbols. These will split to reveal a mystery symbol. Honestly, it's shocking how similar this slot is to its sibling!

Trigger 15 Free Spins with a 2x Multiplier
You won't be surprised to hear that the Scatters, still represented by the silhouetted lovers, trigger 15 free spins when you hit three or more of them across the reels. All wins are multiplied by 2x which is lovely but it's not really enough to set pulses racing.

That just about covers this very shallow slot that is even more shallow if you've played Hyperion before you read this. Not only is this a replica slot but it also has the flaws that a number of recent Microgaming releases suffer from in that you hit a lot of small wins but you're deprived of the big prizes. That is the biggest disappointment. You're better off sticking with more respectable Greek-themed slots from the developer such as the enjoyable Mount Olympus – Revenge of Medusa slot or the equally prolific The Legend of Olympus slot.