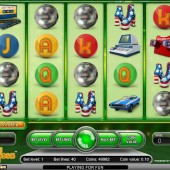 I recently played two pleasant retro slots, The Groovy Sixties and The Super Eighties, both from leading slots developer, NetEnt, and found both to be pretty good trips down Memory Lane.

So, here’s the magic slot to complete the trilogy – The Funky Seventies.

With a nice soundtrack of synths and wah-wah guitars, you could be mistaken for thinking you’re on the set of Boogie Nights rather than the game screen of a 5-reel, 40-payline online slot. But what Funky Seventies lacks in bonus features it makes up for in slam-dunking funk.

As with the other retro slots in NetEnt’s triumvirate, betting is fairly friendly too, with coin bets going from $0.01 to $0.50.

The funky 70s icon acts as the game’s Wild, and substitutes for all regular symbols, other than the Scatter. It’s also stacked, with multiple Wilds helping you to bigger and better prizes.

Look out too for the Disco Diva symbol, as she acts as the game’s Scatter. Three or more of this icon appearing across the reels will trigger a free spins round with five spins up for grabs and a 2x multiplier.

If you manage to hit another three or more Scatters during free spins, you can re-trigger even more freebies.

The Funky Seventies is everything NetEnt are about: simple, clean, and efficient.

Get your hands on a big slab of funk with this no-nonsense bit of retro slots kit, and find a friendly online casino offering the developer’s two other nostalgic slots if this has tickled your fancy.

Now, where did I pack away those flares?