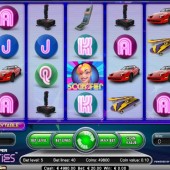 Retro never goes out of fashion, so to speak, and at the moment the 1980s is all the rage.

Whether it’s the achingly trendy hipsters with buttoned-up shirts and comedy beards parading through the high street or a revival of some dodgy pop music and crap digital watches, the time of Wham!, Live Aid and the ZX Spectrum is ripe for a slots development.

Lucky, then, that leading developer NetEnt is on hand to dish out the legwarmers.

With The Super Eighties, the decade is well-represented on five reels in all its gory neon glory. So does it stack up? Relax and welcome to the pleasuredome.

Retro '80s Symbols On the Reels

The Super Eighties, completing the firm’s trilogy of retro slots that also includes The Groovy Sixties slot and The Funky Seventies slot, it features plenty of iconic images from the decade that fashion forgot, including a joystick, a Sony Walkman, a bright red sports car, that stalwart of the Essex disco, the pink Stilettos, and a cool skateboard.

The game’s logo is the Wild, and, like NetEnt’s other retro slots, is pretty stacked on the reels, meaning there are lots of potential juicy winnings. The Wild substitutes for all regular symbols other than the Scatter. Five Wilds across the reels will bag you a 1,000-coin jackpot.

Look out for the game’s only bonus symbol, the girl with hoop earrings who looks like she’s stepped out of a Banarama video. Three or more of our Banarama backing singer icons triggers a simple free spins bonus round where five spins are awarded. They carry a 2x multiplier, but they can be re-triggered by hitting another three Scatters on the reels during the bonus round.

Although the 1980s was the decade fashion and taste largely forgot, it’s not one that slots developers have quickly discarded.

Super Eighties acts as a nice little counterpoint to Net Ent’s other retro games, but, despite a tasty RTP of over 96%, has a rather limited bonus offering, and as such you may find yourself looking elsewhere for extra bubblegum treats.

If you’re an Eighties nut, however, you’ll probably be drawn in by the bright colors and overall pop tone.