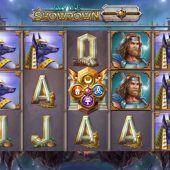 Divine Showdown slot by Play'n Go delivers us into the hands of classic Gods from all cultures, Roman, Greek and Viking which is unusual. The reels sit over a battle-scarred temple and we get equally dramatic music and sound effects as we play. There are any amount of slots from numerous developers with the ancient Gods idea, including Greek Gods by Pragmatic Play, one of my favourites Thunderstruck 2 with the Viking Gods by Microgaming and of course the first and best WMS Zeus slot. So will this showdown slow down our bankroll, or not?

There are 20 fixed pay lines here on Divine Showdown slot with stacked symbols. The 5-of-a-kind pays are Sword Wild 20x, Thor 16x, Athena 12x, Anubis or Wukong 8x with five card values paying 2.5 down to 1x for a full line. Symbols appear stacked, Logo scatters on all reels and as you may anticipate from such a theme, all the Gods can offer their own random enhancement. You may also get a random 2x to 10x multiplier on any spin too, including the Power Spin modifiers.

Three or more scatters triggers a battle spins game. You pick one of the 4 God characters and get 3 lives, and the Battle Reel decides if the spin will be a normal free spin where the random multiplier can apply and your chosen God's modifier will also apply, or if you will battle another God. God symbols cascade down and if you get more, your God wins. If not, you lose a life and get the winning God's modifier for the spin. It ends when you lose 3 battles and Play'n Go tell us 5,000x is possible, though god knows how, ahem!

Divine Showdown slot certainly looks good with a reasonable 96.25% RTP and really good sound effects and animations despite the plain graphics. The free spins can be hard to get which is a shame as they can be frustrating when you get the palaver of a battle almost every time which slows the action down. The base game can produce some big hits too especially with Anubis' Wilds if the two symbols are numerous on the grid and a multiplier is in play. Maybe this is why when I chose Anubis in the bonus he lost all the battles bar one. I think another showdown with these Gods could prove too costly to risk on a regular basis...