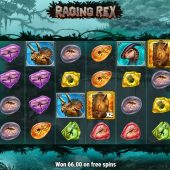 Raging Rex slot is the first attempt by Swedish developer Play'n Go at a game based on WMS' Raging Rhino. Many other developers already have a variation, Thunderkick's Pink Elephants, Playtech's Buffalo Blitz and iSoftBet's Jumbo Stampede to name but a few. Here the theme is dinosaurs as you may have guessed by the name, which Pragmatic Play have already used in their Jurassic Giants version and the reels are set over a primeval swamp and jungle with appropriate jungle drum music and roars when the dinosaur wins appear. There's some pretty sharp teeth on show here, so we must hope they aren't going to take big chunks from our bankroll before the day is out.

As we would expect Raging Rex slot uses the 6-reels and 4-rows necessary for any 4096-way game so we need matching symbols to appear anywhere on consecutive reels from left to right. There are single and stacked T-rex Wilds on reels 2-6 but not on the first so there is no pay for them, but our best 6-of-a-kind is either the Raptor or Stegosaurus at 7.5x, then the Triceratops or Horned Creature at 6x with 6 different coloured insects in amber paying either 3 or 2x for a full way. Icons appear either singly or in double stacks with Meteor scatters on all reels and you pay 20 coins to play.

Before we see the free games bonus, there is a Walking Wild Respin available. If you see a stacked T-Rex fully in view over all 4 rows then you are paid and get a respin with it moving one reel to the left until it disappears off of reel 1. Naturally you want to see this appear as far right as possible for the higher number of respins! You can't get another one appear during the respins though but nevertheless some big wins can result here.

Unlike those games mentioned above, here on Raging Rex we have a choice of 2 free games bonuses. You need 3 Meteor scatters to trigger 8, 4 for 15, 5 for 20 and 6 for 30 spins. During the free spins you also get 5 extra spins for just 2 scatters appearing on the grid. You don't get the Walking Wild feature in either.

Your first choice is Wild Hunt whereby all Wilds on reels 2-6 are single but can award a 2x or 3x multiplier each. Unlike Rhino there is no guarantee you'll get either 2x or 3x but with all 5 Wilds appearing at 3x, a maximum 243x is possible.

The second choice is Primal Rage whereby a reel appears with the fully-stacked T-Rex on and can change to any other reel in the 2-6 range after each free spin. You can still get the single Wilds on the other reels but cannot get another stacked one. This is the lower-volatility choice of the two features and you tend to get far fewer retriggers. On either feature you have the dreaded 'bonus guarantee' of only 5x bet.

Raging Rex slot is possibly the best take on the classic Raging Rhino format I've seen due to the in-play Wild Respins feature and the fact you have two feature choices as well. Play'n Go tell us we can win up to 5000x bet so the potential is certainly there although theoretically this could be achieved on just one free game with a double-dinousaur on reel 1 and all 5 Wilds at 3x so it must be a feature cap similar to what they have on Moon Princess and Viking Runecraft. The RTP is 96.17% but the main benefit this game brings is the fact the base game has far more frequent mid-range pays then some of the others and along with some good sounds, graphics and animations Play'n Go have made a likely gem here. Move over Rhino, the T-Rex can chew through my money instead...