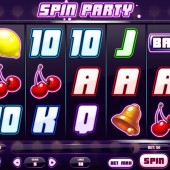 It might come as a surprise but there are not actually too many party-themed slots on the market so when I saw that pioneering developer Play'n Go were releasing a slot called Spin Party I was intrigued by what they were going to produce.

One for the Ladies?

Spin Party is a 5 reel, 10 payline slot that is all about the good times. It feels like it is more catered for the female players with a purple colour scheme, disco lights, light orbs, and a soundtrack that will make you feel like you're playing a slot game in the middle of Tomorrow Land with Avicii performing on the decks.

The symbols are very much in the classic slots vein. There are cherries, lemons, bells, BARS, and 7s dotted across the reels plus the regular 10-through-to-Ace symbols. This will stir a sense of nostalgia in players that have loved their slots for a few years.

The Wild symbol on this slot is represented by the white silhouettes of the female dancers. When they appear on the reels they will expand to cover the entire reel. They also have the power to substitute for all other symbols to complete any potential winning combinations on that specific spin. Furthermore, they trigger one re-spin when they appear and they remain as a Sticky Wild for that re-spin.

Fans of other Play'n Go slots such as the hip hop-themed Pimped and the elegant Royal Masquerade will be delighted to see that this slot follows their lead with a Win Spins feature. On this slot, the Win Spins are triggered if you hit two or more Wilds across the reels. This will see you trigger at least 5 Win Spins. Every Wild that appears during a Win Spin will remain on the reels as a Sticky Wild for one spin. Every Wild that appears on a Win Spin triggers an additional Win Spin. It is possible to earn up to 20 Win Spins in a single go. The best part about Win Spins is that there is a guaranteed prize on each spin.

Spin Party is a mixed bag. The 250,000 coin jackpot prize is small compared to the 1 million coin jackpot in Pimped but it's still not a jackpot to be sneered at. The Win Spins are always a delight to see but triggering them is a bit tougher than on previous Play'n Go slots. It also feels like there could have been a few more symbols and another bonus feature thrown in. This slot is far from diabolical but you're better off with the two previously mentioned Win Spins slots if you want more bang for your buck.