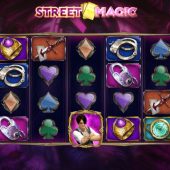 Street Magic slot uses a theme that I'm surprised we don't see more in the world of slot gaming - magicians and illusion. Sure, there are a few out there including a darker magic theme from Play'n Go themselves, Jade Magician or WMS' Magic Wand but I feel that compared to the Irish and Egyptian subjects they are too rare. We don't see perhaps the most famous performer of Street Magic i.e. David Blaine but there is some mysterious music as we spin and gentle taps as the reels stop along with some dramatic sounds when certain icons appear. Other than that, the appearance is pretty basic with a deep purple background and dark purple reels and we've just got to hope our bankroll doesn't disappear in a puff of smoke either!

Street Magic is one of those games that due to the large grid of 5 reels and 4 rows you'd expect 40+ lines but here we only get 20. Symbols are both single and stacked aside from the Wilds in the form of Gold Playing Cards which are the best pay of 25x our 20-coin stake for a 5-of-a-kind win. We then have the Gold Ring also paying 25x, Watch 15x, Lock 6x, Dagger 5x and Handcuffs 4x with 4 card suits all paying 1x for a full line. Now I'm sure you're expecting a magic-themed slot to have a few tricks up its sleeve and you won't be disappointed!

These in-play events are triggered by getting 2 Magician scatters anywhere on reels 1, 3 and 5 which also count as Wilds. Naturally you need all 3 for the bonus trigger but quite intelligently Play'n Go have brought us some fun from just any 2 of them landing:

Wild Shuffle - the Magician throws 4 Wilds onto the grid.

The Transporting Man - the Magician appears on the the reel it's missing from to trigger the bonus.

When you've hit the 3 Magician scatters he will offer you 3 Gold Cards to choose from and you will get either 8, 10 or 12 free spins. During these all Wilds become sticky and remain in place. You cannot retrigger them but like Dead or Alive you will get extra spins if you land a Wild on all 5 reels - the Magician offers 3 more cards which will yield either 4, 6 or 8 extra spins. The bonus doesn't have the potential of Netent's Dead or Alive but Play'n Go tell us we can win up to 5,000x bet in the bonus!

Street Magic slot is a pretty good game overall. The visuals are good and sounds don't get tiresome which along with the regular 2-scatter in-play features make the base game entertaining and not too costly. The free games are very volatile though just like the Dead or Alive bonus upon which this is based - you either get a pretty low return but a very high one if you're lucky enough to get the extra spins which admittedly is going to be rare! The RTP is 96.35% but please remember Play'n Go can provide lower-RTP versions if a casino requests such, so always check the game rules where you play! Yes, this is one magician I'd definitely stop in the street to watch...