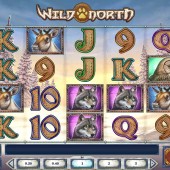 The Alaskan landscape has provided the slots industry with inspiration for a number of top titles and the Scandinavian-based developer Play'n Go has looked to the Arctic Circle once more to get its template for this latest slot.

Take a Trip to the Freezing Abyss!
Wild North is a 5 reel, 40 payline that has its reels set against the snowy and beautiful setting of the Alaskan north with snow-covered trees and an icy-blue sky really making you feel like you're sat in the freezing abyss the minute you load up this slot. Lucky, you're sat in your cosy home on a comfy chair, so let's begin!

The symbols on the reels consist mainly of animals you would expect to be the habitat of Alaska. An owl, deer, bear, and wolf plus the regular 9-through-to-Ace symbols fill up the positions across the reels.

The Alaskan wild lynx acts as the Wild on this slot. It has the power to substitute for all other symbols, except for the Scatters, to help you complete any possible winning combinations that might appear on the reels on a single spin.

See the Northern Lights to Trigger the Bonus Wheel

The Scatters on this slot are presented in the form of the stunning northern lights. If you hit three of these symbols across the reels then you will trigger the Northern Lights Bonus Game. Once triggered, you will be taken to a bonus wheel screen. Here, you will have the chance to spin the wheel to land on one of a number of symbols that offer a different prize.

The potential prizes available include...

The Great Wilderness – This is a symbol represented by every animal from the reels. If the bonus wheel lands here then you will earn 3 free spins plus there will be a 4x4 grid of Mega Symbols that appear on reels 2 to 5 for each of the free spins.

Wild Lynx – This symbol is represented by the Alaskan wild lynx. You will earn 3 free spins once again for landing on this symbol. In addition, one or two reels will turn completely Wild for the duration of the free spins.

Savage Bear – The bear symbol will reward you with 1 free spin and you will also be given a random multiplier value up to 30x on any wins you hit before the free spin. It might only be a single free spin but that multiplier really adds some juice to it.

Eyes of the Owl – The owl symbol will give you 1 free spin. For this feature, you will see two large 2 x 2 owl symbols appear on the reels. One or more re-spins will be rewarded to you until you hit a win. The two large owl symbols will remain as Sticky symbols until the spins finish.

Wild North Explorer – This will take you to a screen where you will have a 20 tile grid of symbols. You must pick symbols to reveal prizes. You can earn cash prizes or trigger any one of the bonus features mentioned above. It is possible to win up to 125,000 coins which is a tasty sum.

Wild North was a slot that I thought might be a sequel to the moody Wild Blood slot when it was first trailered by Play'n Go but alas it appears that is not so. Instead, we are left with a slot that exceeded my expectations. If you loved other Play'n Go slots such as the exquisite Royal Masquerade or the compelling Golden Legend then you will have a hell of a time on this because it has the same level of excitement as those slots. The amount of bonus features is crazy and there's just so much to experience.