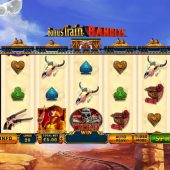 Bonus Train Bandits slot by Playtech takes us to the old Wild West with the reels of the game lying under a precarious looking railway bridge over a desert canyon. We have some really effective locomotive sounds to greet us as we open up the game too and some archetypal music you'd hear as the soundtrack to old classic Westerns as we spin those reels. Think Netent's Wild Wild West or especially Play'n Go's Wild Rails if you've seen any of those particular slots and you'll get a pretty accurate picture of what this game is about, although as we'll see later it's plain this slot got its inspiration from a different Netent game altogether! So will these rail wagons return laden with gold for our bankroll or will we hit the buffers?

We start with 20 fixed pay lines over a standard 5 reels and 3 rows grid and all tiles can appear stacked apart from the scatter and Wild, which is the top 5-of-a-kind pay at 25x bet. Thereafter you have Blue Cowboy at 15x, Purple 12.5x, Yellow Cowgirl 10x, Pistols, Cow Skull or TNT at 4x then four card suits at 3x for a full line. There aren't any random modifiers on Bonus Train Bandits slot but there are a few bonuses to get whenever a scatter appears on the grid.

So the locomotive above the reels is pulling wagons with different things in them and to get the contents you need to land a single Locomotive scatter on the game to get the prize from the wagon stopped above that particular reel. Yes, we seem to have a slot based on Netent's Egg-o-Matic right here but that isn't such a bad thing given the popularity of that game. There are free games available but we'll look at those separately in a minute. For now we can deal with these:

Revolver Wilds - a bandit shoots at the grid and adds up to 6 Wilds where his bullets land.
Cash Prize - these are the wagons with gold in and can give up to 100x bet.
Super Spins - a symbol is randomly selected and the reels will spin with only that symbol on the grid or blanks. You get 2 spins which reset whenever one or more appears and lines are paid for the symbols in view after 2 consecutive losing spins or when the grid is full.

You cannot retrigger these free games but they are quite exciting. The train moves along the track above and every spin your cowboy runs along the wagons to increase the multiplier by lx. You get unlimited spins until you've had 5 wins so can easily get up to a 20x or more multiplier before the final win comes in. This raises the chance of some wins of several hundred times should you be lucky enough to land a 5OAK win in the latter stages as the multiplier is unlimited. Great fun!

Despite the fact that Bonus Train Bandits slot is clearly influenced by an existing mechanic Playtech have done a good job with this game, managing to incorporate an increasing multiplier and the Super Spins feature into the bonuses. The game sounds and music are really good as are the animations when the features occur plus we get a respectable 96.12% RTP for our money. The free games are by far the most entertaining feature and although it's unlikely they will provide huge total returns they are involving and remember this isn't designed as a high variance game, more in the low-medium range I'd suggest. You could do worse than book yourself a ticket for this train...