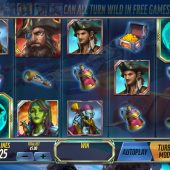 Starmada Exiles slot from Playtech is a trademark theme centred on a popular battle game featuring pirates and spacehips, along the lines of IGT's Star Trek if you've ever played that particular slot. The appearance is more advanced than the childish Alien Hunter slot of theirs and the tongue-in-cheek appearance is reminiscent of Cowboys and Aliens, where 2 seemingly unrelated subjects are thrown together. The reels are semi transparent and overlay battling spaceships in a night sky with a planet close by while we hear movie style music as the reels spin. If we take on this Starmada, we'd better hope our bankroll doesn't get exiled!

Our adventure here starts with 25 lines over 5 reels of 3 rows with some symbols appearing stacked on them. Of the four Exile characters, the Pirate pays us 60x bet for 5-of-a-kind, Green lady 40x, Captain 28x, Skeleton 20x the the object icons are Treasure Chest 15x, Tankard 8x, Compass, Ray Gun and Blunderbuss all at 6x. Golden Wilds can appear singly on all reels bar the first and the Astral Globe is our scatter here. No random modifiers here, so straight into a strange bonus set-up!

If you see scatters just on reels 1 and 3, you get to pick one. It will either reveal a tawdry cash award up to 5x bet of will store one of the four Exile characters as a Wild on the left of the grid. There is a meter to fill which can become very important for the main bonus if you fill all four. Each time you do turn one Wild before triggering the main bonus, the two scatters will turn into Green Crystals on the reels 1 and 3 which means during the base game they will also award up to 5x bet when appearing in view.

You need to land the Astral Globe scatters on reels 1,3 and 5 for these. Hopefully you will have turned all four Exiles into Wilds beforehand with the Plunder Bonus described above. This is because all the Exiles who've been given Wild status will now also act as Wilds on reels 2-5 in the free games wherever they appear. If you haven't turned any or all of them Wild, reel 5 has stacked Red Crystals on and every 3 collected will transform an Exile into a Wild as you play. You can retrigger them too.

Starmada Exiles slot is OK-ish if you like this kind of theme as it's not too childish and has some decent line wins possible in the base game. Your 96.18% RTP isn't bad either, nor are the animations and soundtrack or graphics but there are a couple of negatives to discuss. Firstly, the free spins are dreadful if you haven't got at least 2 of the four Exiles as Wilds before you start. The second problem is that when you have converted 3 or all 4 of them with the Plunder Bonus in the base game, then getting the trigger for the 10 free games seems to take absolutely ages, suggesting the game is altered according to progress. When you do trigger them, even with 3 or 4 Exiles as Wilds the pay can be pretty dire. I think these 4 Starmada characters can stay in Exile for all of eternity...