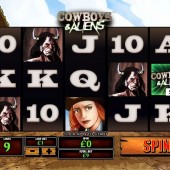 Cowboys & Aliens is a Playtech developed Western themed slot game that has been released as a top slot title after it experienced huge success as a graphic novel and then as a Hollywood blockbuster movie starring Daniel Craig and Harrison Ford.

This 5-reel, 9-payline slot might not have the Craig and Ford presence but it does not fall short when it comes to reaching the heights that the novel and movie reached with lots to offer players.

In the absence of Hollywood A-listers on the reels the symbols come in the form of characters from the story in a cartoon graphic. Zeke the cowboy, Verity the cowgirl, an Indian Warrior, Preacher, Aliens and Spacecraft all make up the symbols that populate the reels.

The slot comes with a Wild symbol that is represented by the Flaming Spacecraft. It will substitute for all other symbols, except for the scatter symbols, to complete winning combinations during regular game play.

Random Wilds With the Ray Gun

The Ray Gun scatter symbol will trigger the Alien Weapon feature if you hit it on the first reel.

A number between 1 and 4 will then appear in the line of sight of the gun and this will reveal how many symbols across the reels will be shot and turned Wild.

There is also a Free Spin scatter symbol. If you manage to hit three or more of these symbols across the reels then you will trigger 8 free spins. This will give you a great opportunity to win some prizes.

Choose Your Hero For Bonus Cash

You can also trigger another bonus round if you hit the Bonus symbol on Reels 1 and 5 simultaneously.

This will take you to a more interactive feature where you must select one of the main characters from the story in the form of Zeke, Verity or the Indian Warrior.

Aliens will then appear and you must use your chosen character to eliminate as many aliens as possible and increase your chances of winning big. Each character has a different weapon so choose wisely.

Cowboys & Aliens might disappoint some by not being more true to the movie and representing the graphic novel more but that disappointment fades when you start spinning.

The more interactive bonus rounds are great and the three different bonus features will keep the game fresh for a long time.

Fans of other comic book inspired slots including the superhero themed X-Men and the exciting Marvel themed Iron Man slot will also love this slot. 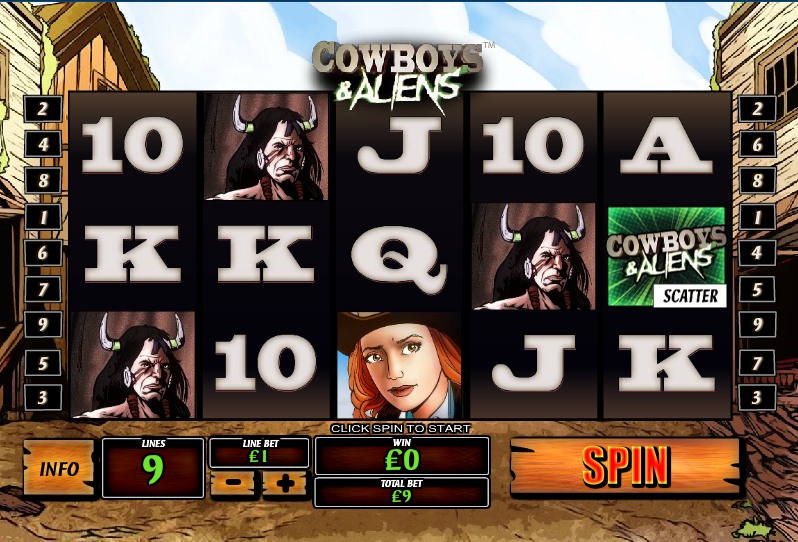 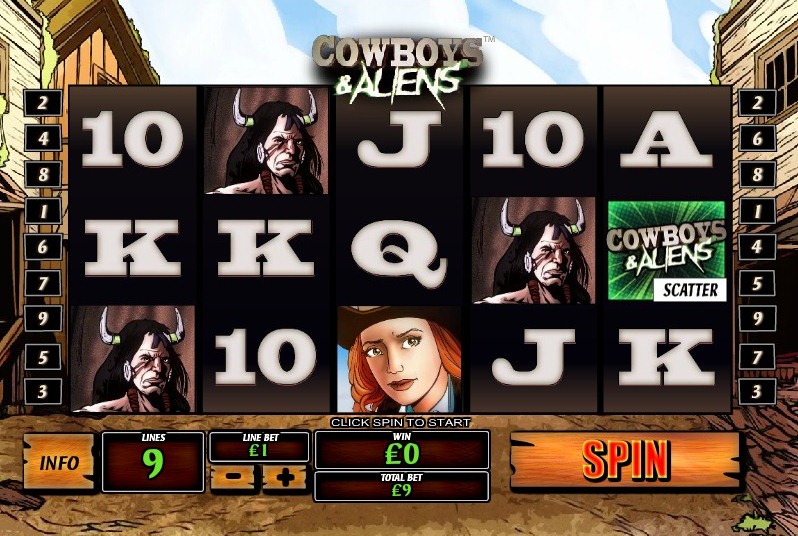