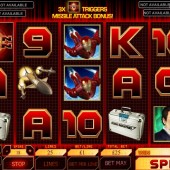 A deal between casino software company Playtech and Marvel Comics has seen the release of some excellent video slots in recent years.

In fact, some of the most exciting characters from the hugely popular comics have made their way into online slots including The Hulk, X-Men, the Fantastic Four and everyone's favourite star inventor and playboy - Iron Man.

These games followed some other very good titles from Playtech such as Gladiator video slot and Kong and established them as a key player in online wagering games.

Go Ballistic With the Missile Bonus

The big draw for in Iron Man is the bonus round, which is triggered by getting 3 or more scatters anywhere on the screen.

This will take you through to the Missile Attack Bonus, which sees you chasing down 12 heat-seeking missiles (as Iron Man of course). When you catch up with them you get to pick up to 12 of those heat-seeking bad boys which release cash rewards or free spins and a multiplier.

This can be very rewarding, especially if the feature retriggers. In fact, over at GamingSlots Towers we managed to get 18 free spins with a 3x multiplier many times, but 20 free spins isn't unheard of.

Iron Man is a very entertaining video slot and we actually prefer it to the follow up - Iron Man 2 online slot. Like Tony Stark, it's flash, confident and pretty kick-ass. Suit up and enjoy some airborne action and you might end up a millionaire too.