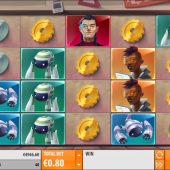 No, Big Bot Crew slot is not themed on an overweight Hip Hop band but giant robots and other cartoon mechanical nonsense with three geeky kids and random pieces of machinery scattered everywhere. The reels sit over a deserted night time cityscape and we get some synth rock music as we spin, with dramatic crashes and bangs as the reels stop and certain symbols appear. Robots don't appear too often in slot games, although you may have played iSoftBet's 'Robo Smash' or more likely Microgaming's Robo Jack in the past yourself, the latter slot being quite decent. So will the Big Bot Crew be profitable for us, or will it be a case of the big bankroll screw?

The grid consists of 5 reels of 4 rows each with stacked symbols and we play 40 lines although Quickspin allows just a 20-coin stake at the lowest. The highest symbols are the nerds (the rules call them 'tech heads') and Matsuo pays 7.5x bet for a 5-of-a-kind win, Danielle 5x and Joaquin 3x with either the green or purple Bots paying 2x. We don't get the usual card suits though and the lower pays are in the form of four different coloured wheel cogs paying either 1.25 or 1x stake for a full line. Bonus scatters appear on the middle three reels but first we must deal with the Wilds which themselves can award features.

On reels 2, 3 and 4 you will notice a giant Red Robot which is stacked 4-rows high and sits over a yellow background, in fact quite similar to Playtech's original Iron Man slot in appearance. Anyway, you need 2 or 3 of them to land fully in view to trigger a re-spin for each one thus getting either 2 or 3 re-spins. If this occurs the Big Bots will have rockets in their feet and zoom up out of the grid and then land on random reels. Should you get another fully in view you get one more re-spin - because they move to any of the 5 reels you can actually fill the grid with them theoretically and if you did you would get 10x bet for 5-of-a-kind over 40 lines, 400x bet.

Sometimes if you get two Big Bot Wilds partially in view or one full and one partial, the partial one(s) may nudge to fully stacked so effectively a random expanding Wild feature which will also trigger the above re-spins if it occurs.

So, you've landed the three bonus scatters on the centre 3 reels. Now you will get 8 free spins and the enhancement here is that any partial Big Bot will always expand to full size and when it does it will add an extra spin. The feature works the same way as the re-spins above but you have far more chance of getting the full screen. Quickspin state that you can win up to 5000x bet in this bonus, which would happen no doubt if you achieved a full screen very early in the feature and therefore had a sticky full screen for the remaining spins.

Big Bot Crew slot is clearly Quickspin's variant of their other game with a similar mechanic, Sakura Fortune. The graphics here are far more juvenile but on a positive note I prefer Big Bot Crew's feature construct to that of Sakura Fortune's. The RTP is a good 96.51% and there is undoubtedly some serious big win potential too with the free games seldom producing poor returns and if you're lucky enough to get 3 or more Wild reels early on then you're pretty much guaranteed a pay in the hundreds times bet range. I didn't appreciate the look of the game at first, but these 'tech heads' are quite likely to tempt me back some time soon...