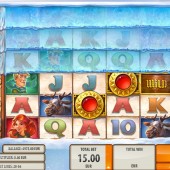 There is something about mythical slots that stirs the emotions. I've always been a fan of them but that's perhaps I'm a fan of myths and legends away from playing slots anyway. So when I saw that prestigious slots developer Quickspin had released a mythical-themed title called Crystal Queen I was quite excited.

Crystal Queen is a 5 reel, 56 payline slot that looks like it is some sort of spin-off of the Chronicles of Narnia that focuses on the Snow Queen. My initial impressions is that this is a visually stunning slot and it's just a case of whether the game play can live up to the high levels of the graphics.

The symbols on the reels include the Crystal Queen herself, the attractive female, the handsome male, a comical moose (yes, you read that correctly), and the regular 10-through-to-Ace symbols that fill up the remaining positions.

Immediately, my interest is peaked when I see that there are two types of Wilds on this slot. First, we have the regular Wilds. These are represented by a basic Wild symbol that appears on reels 4 and 5 in the base game and on reels 1, 2, 4, and 5 during the free spins bonus round. They substitute for all other symbols, except for the Bonus Scatters and the Spreading Wilds, to complete winning combinations.

Secondly, as I just mentioned, there are Spreading Wilds. These are represented by a similar Wild symbol except it has a series of arrows that point outwards in each four directions. This is a big clue about the power of these symbols. They can appear on reels 1, 2, and 3 in the base game and reels 2, 3, and 4 in the free spins bonus round. When they appear, they will add an extra 1-5 Wilds in adjacent positions. Like the regular Wilds, they have the ability to substitute for all other symbols, except the Bonus Scatters, to complete winning combinations.

Now, onto the bonus features. The first one to cover is the Swooping Reels feature. This is triggered whenever you hit a winning combination. Basically, after a win, the symbols involved in the winning combination will disappear and they will be replaced by new symbols from above in a similar way to FreeFall Symbols slots such as IGT's Natural Powers title. This feature will continue until there are no winning combinations triggered.

Free spins fans will also be delighted to hear that Quickspin have not forgotten about them here. The Bonus Scatters are the key to triggering these. They are represented by a ruby-centered golden piece of jewellery. You must hit three or more of these across the reels to trigger the free spins. Once triggered, you will be awarded with 10 free spins. These free spins will be played on all six rows on the reels with the top three rows unfreezing. It is also possible to win both ways during the free spins.

Crystal Queen is a slot that had caught my attention and only proceeded to keep it. I look at some other Quickspin slots I have enjoyed such as the regal-themed King Colossus and the colourful Illuminous but this slot is even better than those. The Swooping Reels is Quickspin's own crack at FreeFall symbols or Cascading Reels etc and that's a great thing to see. The wins can rattle out and then that's even before you touch the free spins. What a little treat this is!