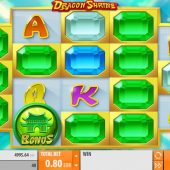 Quickspin make distinctive games, always with their light orange backgrounds and distinctive white digits on their balance and stake windows. Beowulf slot, Crystal Queen and Firestorm are some of their most popular slots. The slot Second Strike is one of their titles that I regularly return to, so will Dragon Shrine be another one that I also add to my favourites?

You have a 40-line game with a strange reel format of 3, 4, 4, 4, 3 rows on the 5 reels. All symbols including the elusive Wilds appear stacked on all reels and aside from the Dragon take the form of gems or letters. The Wilds are top-paying at 10x stake for 5-of-a-kind (5OAK) down to the lowest letter at a mere 0.25x stake for the 10's!

There is a frequent respin feature - should you get a full stack of the dragon on reel 1, three respins occur, each time holding any dragons or Wilds that appear, then the result is paid. This can give a decent return but as the game is quite low in volatility, 'decent' may mean different things to some.

The main feature is triggered by 3 scatters on reels 2, 3, 4.  You will get 10 free games in which the above feature is enhanced. The respins can be triggered now by the stacked dragon appearing on reel 5 too, and what's more before the respins start it will fill the opposite reel so both 1 and 5 will be stacked with dragons.

The tired old format of stacked gems isn't really improved upon here, and given the 5OAK dragons pay a mere 3x stake then you only have a potential of 120x stake for a full screen, or 400x stake for the Wilds.  Part of me likes features that have very high potential and to have an effective cap so low is slightly off-putting. The game RTP at 96.55% is quite high but the variance or volatility may be too low for some. This dragon breathes smoke rather than fire...