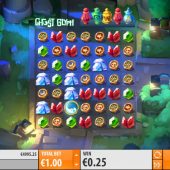 Ghost Glyph slot by Quickspin has clearly been influenced by Play'n Go's ever-increasing selection of grid games as it has a similar set-up although represented differently. So if we consider Moon Princess slot, the earlier Reactoonz slot and the last in that series to date, Golden Ticket 2 slot then you'll have an idea of what to expect here. The background is a castle at night and we have zany music to listen to while watching the arcane style symbols tumbling, with a juvenile ghost making occasional appearances. So will our bankroll soon become spectral in nature or can we give the casino a fright?

It's a simple 7x7 gird here on Ghost Glyph slot with 5 or more adjacent tiles required to win. You will get a randomly placed Glyph for each winning cluster which acts as a Wild and is removed to be stored at the top of the grid. Where this is stored, you'll see each play a different combination of urns which offer modifiers when activated.
Red Ghost Urn - selects a low-pay tile and removes it from the grid.
Green Ghost Urn - removes all of one low-pay tile and swaps it for another.
Yellow Ghost Urn - places 4-10 random Wilds on the grid.
Blue Ghost Urn - triggers 8 free games, with 3 extra spins if seeing it during those.
Your symbol pays range from 15+ to 5 at lowest and are Diamond 600x/1.5x bet, Ruby 300/1x, Emerald 150/0.5x with 4 low-pay Rune symbols all paying 15x/0.25x for the maximum and minimum winning clusters respectively.

So having unlocked the Blue Urn you get 8 free falls. These play out with the same modifiers but you will now see a Paranormality Meter which is filled by 8 winning tumbles a time. If you fill it once, you get two 2x2 Glyph Wilds placed on the grid for a win. Fill it twice and a 3x3 Wilds is placed instead. More than twice, then for each meter fill over two the 3x3 Wild will move position and remain for another re-spin. We are told there is 5,000x potential on this game.

Despite its zany sounds and appearance Ghost Glyph slot is quite playable with frequent bonus rounds and winning actions. You'll be unlikely to get massive wins though in the bonus although the 96.18% RTP is decent enough. This game is more about entertainment through the vibrant colours and animations it provides so in that respect you won't be disappointed, plus you'll get a decent run for your bankroll. No need to be frightened by this ghostly game...